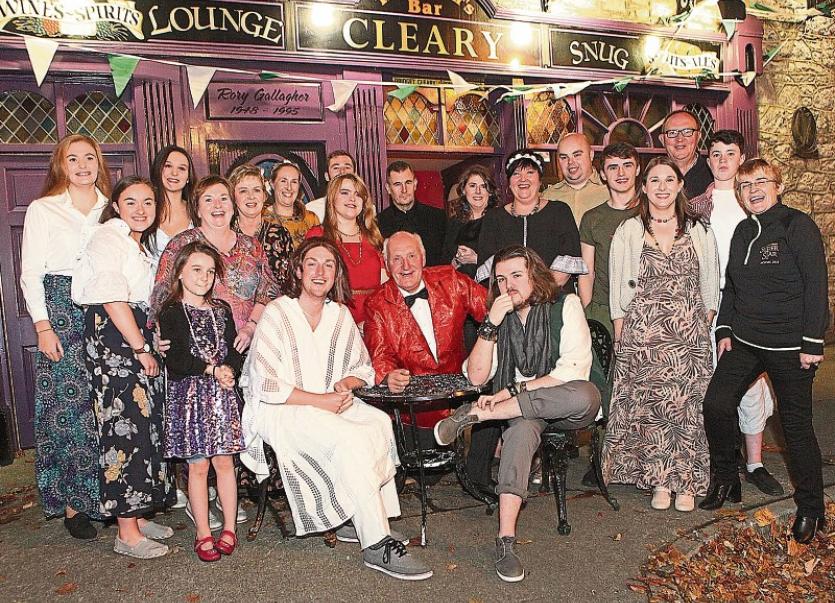 The cast and crew of Jesus Christ Superstar which opens in Castlemahon Hall this Thursday and runs over two weekends.

THE Newcastle West Musical Society has been on a harmonious journey for the past decade, involving hundreds of people of all ages in creating the magic of a production on an annual basis.

Now, to mark its 10th anniversary, the Musical Society will present one of its biggest ever productions, Jesus Christ Superstar, opening next Thursday night and running for six nights.

And in a lovely twist, Jamie Herlihy, who starred as one of the brothers in Blood Brothers, the society’s first  ever production, is returning to play Jesus in this very special anniversary show.

Jamie, now a music teacher and director of the Desmond School of Music and Theatre,  has invested a lot of energy in the role of Jesus. “When you hear him sing the beautiful Gethsemane the hairs on the back of your neck will stand on end,” promises Marie Hester who is PRO for the musical society.  “A treasured new find this year is band front-man Shane Walsh as the betrayer Judas,” she adds. The two men are superbly supported by Feile medallist Grainne Ahern as Mary Magdalene and the main leads are backed by a marvellously energetic chorus of children and adults, all ready to wow their audience with their singing and dancing.

With a cast of 70, 26 of whom are children, the musical draws on a deep pool of West Limerick talent.

“We felt it was important to build on the success of Annie, by involving as many children as possible in this year’s show,” producer Tom Madigan said at the launch of the musical in Newcastle West this week while director, chorus mistress and choreographer Susan Browne was equally upbeat about the involvement of a large number of children. “I am committed to fostering musical talent in West Limerick,” she said.

“We will prove that the rewards reaped from working with this amazing group of children will far outweigh any challenges associated with it.”

The cast has been working hard over the last number of months and next Thursday, the curtain will go up on the first show at the Castlemahon Community Hall at 8pm. It will also run on Friday and Saturday, October 26 and 27 and again on Thursday, Friday and Saturday,  November 1, 2 and 3. Tickets at the door, €15 for adults, €10 for students and €5 for children.

Past productions include South Pacific, Oklahoma, Oliver and Fiddler on the Roof.