‘We are the ones who are still suffering’: UL whistleblowers to be put on half-pay 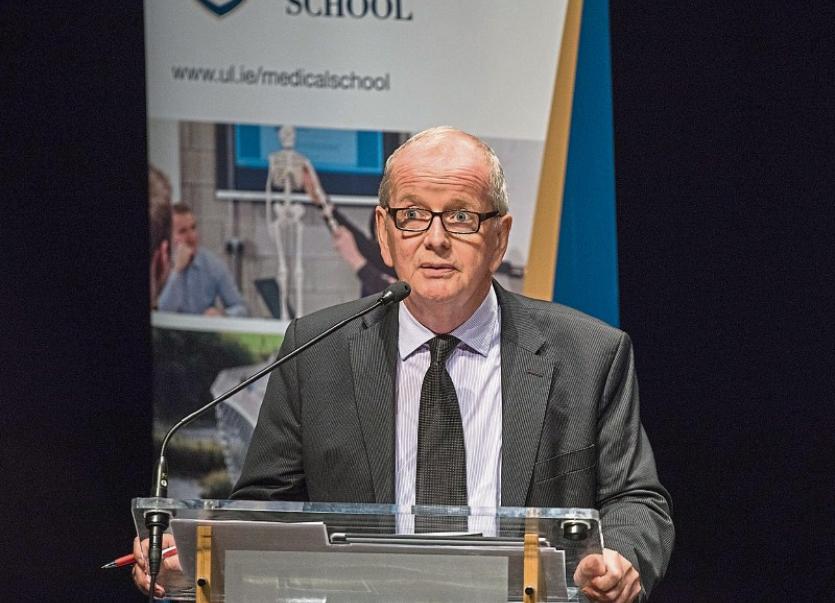 UL president Des Fitzgerald and, inset, new Minister for Education Joe McHugh, who Persons B and C have called on to intervene

ALMOST a year after the University of Limerick first lifted the suspensions of two staff members who raised concerns about financial practices, the employees known as Persons B and C have yet to return to work.

More than three years ago, the two employees were suspended with pay from the university after being accused of making a “malicious” complaint against a colleague, a charge they robustly denied.

Shortly before they were suspended, Persons B and C had declined an offer of nearly €60,000 each to leave their jobs. That offer was conditional on a confidentiality clause.

Next month, they will be put on half-pay by UL, unless there is a resolution to their situation.

Speaking to the Limerick Leader this week, Persons B and C described the prospect of being put on half-pay as “cruel” and “unfair”, and said their continuing absence from the workplace is through no fault of their own.

In response to this, a UL spokesperson said: “There are clear rules in relation to pay to employees who are not attending the workplace. UL is seeking to abide by the procedures at national level and hopes that the employees in question return to work where the university has committed to being as supportive to them and their colleagues, as is possible.”

Persons B and C say that the process to facilitate their return to work was abruptly terminated in July by UL.

At that point they were instructed to return to their former roles, a prospect which filled them with dread, as they do not believe they would be welcomed back by their former colleagues. In any case, UL has long since replaced them and new employees are carrying out their former responsibilities.

“We should not be put on half-pay because of a situation the university has caused,” Person C said.

“We want mediation talks to be reopened,” Person C added. “As far as we were concerned, we were still open to various discussions and the process was closed very abruptly. Offers that were put to us, we didn’t reject. UL took those offers away. It was cruel in how it was done.

“We would like to go back into a process where we can try to have discussions around all of this and we just want the Minister and the Higher Education Authority to intervene.”

Two local Fianna Fail TDs who highlighted the whistleblowers’ case in the Dail chamber as far back as October 2015 have supported their calls for the Minister to intervene.

“I would be fully supportive of that,” Deputy Niall Collins said.

“It is disappointing that they feel they haven’t received proper closure through the process to the date and I would call on the new Minister for Education Joe McHugh to familiarise himself with the circumstances and make himself available to meet with Persons B and C.”

“The university seem to be very unreasonably in how they are handling this and it doesn’t seem to me that they are acting in good faith."

A UL spokesperson said the university “continues to work through the procedures and processes laid down for resolving human resource issues that arise in public sector organisations.

“The staff who were previously suspended from the workplace have been encouraged to return to the workplace. This process of mediation and due process began last November, 2017, when UL lifted a suspension on two employees.”

In November 2017, the university’s new president, Dr Des Fitzgerald, enlisted Kieran Mulvey, the former head of the Workplace Relations Commission, to head up a mediation process with employees unhappy with their treatment by UL.

The move coincided with the publication of the Thorn Report, a wide-ranging investigation into UL finance, human resources and governance policies. The suspensions of Persons B and C were lifted at the same time.

However, Mr Mulvey only met with Persons B and C once. Subsequent contact with the employees was through Sean O’Driscoll, a HR consultant who has also been leading the restructuring of the human resources department. Both B and C feel that outside intervention is needed if they are to be able to move on with their lives and careers, either at UL or within the public sector outside the university.

This Wednesday morning, Person C received a letter by email from the office of the president, Dr Des Fitzgerald, informing her that the university had identified a “redeployment opportunity” for her.

The letter included a job description for an administrative role in a different department. The email proposed that she be redeployed on a secondment basis from November 1.

Person C said the letter made no reference to the numerous issues that remain unresolved between her and UL and she found it “upsetting and insulting” that the university had made no attempt to “sit down and discuss things before they act”.

The letter, she said, made no mention of offering her support in readjusting to the workplace at UL, and included no acknowledgment of the difficulties she and Person B had endured.

“To me it reads like they just pulled this job off the website and offered it to me so that they could tell people that they were making efforts to redeploy me. I don’t think they have any understanding of what me and Person B have been through for more than three years, or the effect this has had on our mental health,” she said.

Both Persons B and C have spent their time away from the university completing a series of courses. They say the long-running saga has been immensely stressful, but that they are “still standing” and desperate to move on from the stressful situation.

Person C said that while her experience has been very difficult, it has also been “character-forming”. She now wishes to use her experience for the betterment of others.

“We’re trying to heal from a lot of suffering and that’s not something that’s going to happen overnight,” Person C said. “We’re entitled to look after our health and our wellbeing. We’re not getting a chance to really do that when the situation is how it is right now. There’s no space to give us time to heal. It’s been battle, after battle, after battle.”