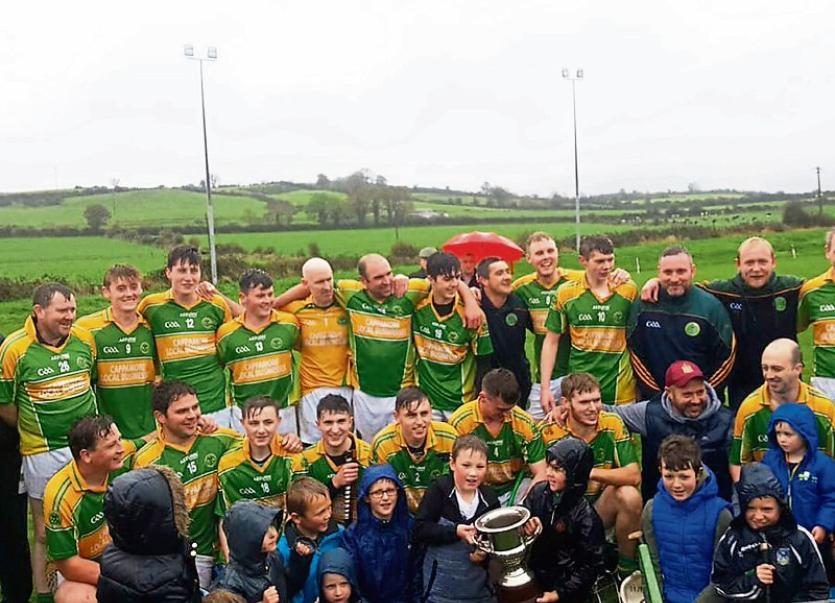 THE HEAD of the Government’s financial watchdog is forever busy trying to save the country from another economic crash but on Saturday all he was focused on was stopping goals...even though he never got a chance.

Seamus Coffey, a lecturer in Economics in UCC and familiar face in the media togged out with his beloved Cappamore in the County Junior B hurling championship final.

As the chairman of the Irish Fiscal Advisory Council, Mr Coffey has the national interest at the forefront of his mind but it was a local rivalry against Doon that he was focused on last Saturday.

“A county final against the nearest club - there is always going to be a bit of an edge to it. It was a two point win in the end. It was pretty tight but we held out and got over the line,” said Seamus, who was the sub goalkeeper.

Speaking on RTÉ’s Morning Ireland after the Budget, Seamus said there were no savings going into the “rainy day fund” announced by Minister for Finance Paschal Donohoe.

But there were plenty of saves made on a very rainy day in Kilteely as Cappamore won by 1 - 8 to 9 points.

Seamus is steeped in the GAA as his father, Patsy is a well-know referee while his grandfather was the legendary Jimmy ‘Butler’ Coffey. He won Munster and All-Ireland medals with Tipperary, Limerick county titles with Ahane where he played beside Mick and John Mackey in a deadly full forward line, and trained Cappamore teams to junior and senior titles. Jimmy passed away in his 102nd year in December 2010.

Seamus said there is a “huge amount of pride” in pulling on the green and gold jersey.

“I was away for a few years recently. I am just back so it was great to be able get straight back into it and enjoy a bit of hurling. A few of us on the team would have soldiered together over the decades. We’re still putting a little bit back in so it was good to get over the line on Saturday.

“It is hard to win anything so any county championship should be celebrated,” said Seamus, who described Saturday night in Cappamore as “lively”.

Seamus now has the two County Junior B hurling championship medals to his name - the first came in 2006 - and a Junior A title in 2011. He also won the Munster long puck competition in 2010.But despite turning 40, Seamus still isn’t ready to retire from the club scene.

“It is pretty close. At some stage I would like to play a match with Cappamore where I am the oldest person on the team. Even at 40 that hasn’t happened yet. When I play a game when I’m the oldest person on the team then it will be time to hang up the hurling,” said Seamus, who was cheered on by wife Deirdre and their children Diarmuid, aged 10; Orla, 8; and Aisling, 6.

“The children came to support the team. They thought it was great. They are Cork supporters but they had their Cappamore jerseys on them for the day,” smiled Seamus.

He describes the road from Cork, where he lives and works, to Cappamore as “well worn”. Next Monday night, October 22, he is back again as Cappamore Historical Society is hosting a lecture by Seamus titled, A guide to the Irish economy: where does our money come from. It commences at 7.30pm in the community centre. All are welcome.