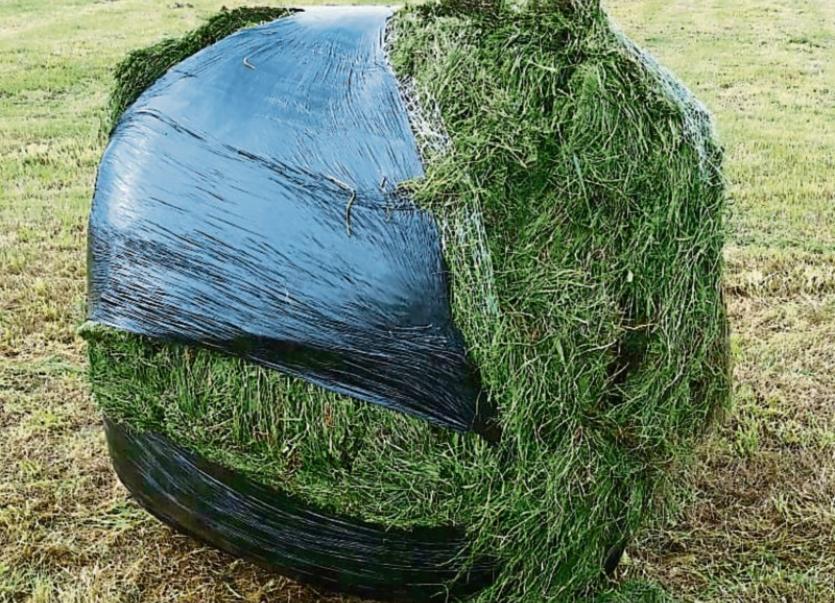 One of the damaged silage bales

A COUNTY Limerick farmer had 16 bales of silage slashed to pieces in what he describes as a “despicable crime”.

Half of 32 bales made on land in Ardroe, Pallasgreen, owned by Patsy O’Keeffe, were cut. It is believed the perpetrator, armed with a knife or sharp implement, damaged the precious fodder under the cover of darkness.

“It is a chilling thing to see a field full of bales and have of them cut to shreds,” said Mr O’Keeffe.

“We consider ourselves a decent, hard-working family and we can’t understand why somebody would do this,” he continued.

Mr O’Keeffe, aged 60, lives in Kilteely but farms 10 acres in Pallasgreen that were left to him by his late mother.

He sold the silage crop from a five acre field to a neighbour.

“He got a contractor in to bale it last week. It was a fine crop - it was top quality silage. They cut it on Monday, baled it on Thursday and left them in the field.

“On Friday, my neighbour sent down a lad to bring them back to his farm. The lad rang my neighbour straight away when he saw there was 16 - exactly half of the bales – cut and damaged. It was right through the plastic and netting. My neighbour rang me. I was up the country at the time.

“It was shocking in the extreme, despicable carry on. It was pure blackguarding,” said Mr O’Keeffe, who works as a van sales rep.

He immediately contacted Bruff gardai who are investigating the crime.

Each silage bale is valued at around €40 so Mr O’Keeffe is at a significant financial loss.

“My neighbour brought away the 16 bales that were left alone. He wrapped some of the damaged ones again but there were ones that couldn’t be salvaged. He took them away loose in a trailer,” said Mr O’Keeffe.

He said the money was ear-marked for his three sons’ college fees and accommodation,

“That’s where it was going. Every euro I can I spend on them to give them a good education. I feel sorry for my neighbour as well because silage bales are so scare with the fodder crisis,” he said.

Limerick IFA chairman, Shay Galvin said he never heard of anything like this happening before and called it “wanton vandalism”.

“And especially after a year like this when there is a fodder crisis,” said Mr Galvin.

Anybody with any information is asked to contact Bruff Garda Station.