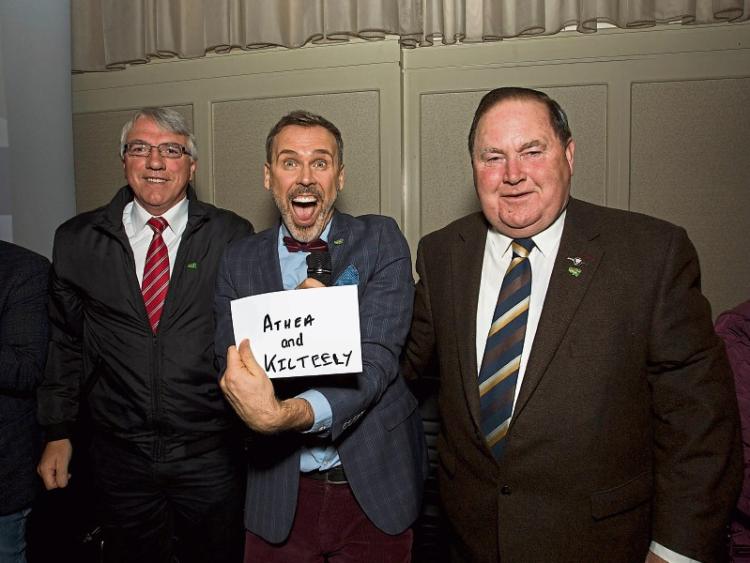 Going for Gold MC Richard Lynch is flanked by Henry Moran of Athea and John McCarthy, Kilteely as he announces the result Picture: Alan Place

FOR the first time in Going For Gold history two County Limerick communities in went home with the grand prize of €10,000.

Members of the Athea and Kilteely Tidy Towns committees, leapt for joy when MC Richard Lynch made the announcement at the Limerick Strand Hotel on Tuesday night.

“This year we decided to do a first, and for the first time here in Going for Gold, you’re both getting €10,000!” Mr Lynch hollered, with the historic announcement receiving rapturous applause.

Kilteely’s performances in previous Going for Gold competitions have improved every year and in the committee’s tenth year their painstaking efforts were finally recognised, seizing the well-earned prize of €10,000. The was no rest for the wicked for Kilteely Tidy Towns’ John McCarthy who was unable to sleep after the celebrations.

“I went to bed at two o’clock, and I woke up at ten to five in the morning, and I got up because I couldn't sleep with the excitement of the night,” he laughed.

“It meant so much to me, I’ve been pushing this for the past ten years, and we have raised our standards every year, it was a wonderful achievement,” Mr McCarthy rejoiced.

Wildcard finalists Athea’s efforts in helping the environment through innovative measures such as self-watering flower pots and the conversion of an unused telephone box to a defibrillator were deemed a massive advantage in earning the judges’ vote.But Damien Ahern of the Athea Tidy Towns committee said it was “hard to believe” his village had won the €10,000 prize.

“We didn’t expect to win it at all, but we put in a lot of work, and we were lucky a lot of volunteers came on board, and they have made a huge difference for the overall look of the village,” Mr Ahern beamed.

Mr Ahern was also elated to secure an extra €500 for himself and the community after winning the #loveyourlimerick photo competition for his photographs of a snowy Athea.

“I was delighted, it was during the snow this year, and I went out at 5 o’clock in the morning and took some lovely pictures of the village, it was a great night for all,” he added.

Liam MacCarthy was an esteemed guest of honour of the evening who garnered a lengthy queue for a ‘photo-op’ with attendees.

Gerry Boland, of the JP MacManus Foundation who back the awards, described the Going For Gold prizes as “not as elusive,” as the prestigious All-Ireland trophies and he commended the massive commitment given by the volunteers for their communities and county in the pursuit of local excellence.

“I am conscious of the Trojan work conducted by the many volunteers in other areas and of the particular success which you have achieved in improving the environment and landscape of city and county in which we live,” Mr Boland concluded.

A whopping total pot of over €80,000 across all categories was funded by Limerick City and County Council and the JP McManus charitable foundation.

Mayor James Collins encouraged all communities to: “Cherish this positive ‘can-do’ attitude you foster in your communities. We are recognising your valuable contribution and it is that we are here honouring tonight.

“Nurturing community spirit and fostering civic pride are an important part of Limerick Going for Gold,” he added.

Richard Barry, Chairman of Tallanstown Tidy Towns in County Louth along with retired Director of Limerick City and County Council, Jimmy Feane acted as the judges.

Mr Barry stated: “I must say I’ve been really impressed with the work carried out in the communities and especially the improvements that I’ve seen in the past 12 months.”

Eugene Phelan, editor of the Limerick Leader newspaper, who are one of the media sponsors of the event, acknowledged: “Along with the annual Team Limerick Clean-up on every Good Friday, the Going for Gold initiative, is helping transform Limerick city and county.

“Both events are helping bring communities in Limerick city and county closer together with the aim of making their towns, villages and districts, better places for all to live in,” added Mr Phelan.