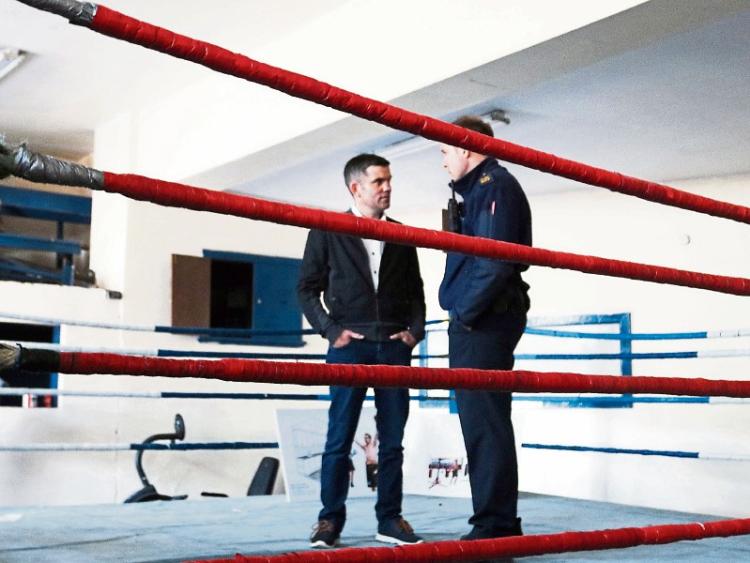 BOXING legend Bernard Dunne has put himself in the corner of a campaign to reopen a northside club.

For the last 15 years, St Munchin’s Boxing Club, just off the High Road in Thomondgate, has lain idle, with former Olympic boxer Pat O’Halloran and Cllr Frankie Daly among the many to campaign for it to be reopened.

To this end, they invited the former World Champion super bantamweight nicknamed the ‘Dublin Dynamo’ to Limerick.

He pledged to do “everything he can” to bring the opening date of St Munchin’s Boxing Club closer. Electricity has been reinstalled, and funding is currently in the process of being sought.

“I know the impact a boxing club and sports facilities in general can have on young people’s lives. Too often we label kids, and there’s nothing expected of them. The nice thing about sports is that it allows you to dream and be something more than is ever expected of you,” Bernard said.

Pat added: “Today is about getting St Munchin’s Club back open. It has produced some fantastic people, some fantastic champions, national champions down through the years. The clout Bernard has, and being in the position he is in, has really helped us.

“For 15 years, we’ve had our troubles, we’ve had feuding gangs and the car robbing. We’re trying to put that right,” he said.

And he should know what makes a good GAA side, with the boxer a performance and lifestyle coach with Dublin’s side, which won the football equivalent.

“The one thing which stood out for me was their want and need to be the best. Sometimes we can take a sport we want to win, but we don’t commit to it. Commitment is one thing I saw from the Limerick hurlers,” he said.

Bernard said he had heard tales of John Kiely’s magnificent side ahead of the final.

“From the stories I have heard of their training, their preparation was meticulous. There was a real desire there to be the best. You make choices in life, and they made the right ones,” he added.

“At that level, everyone has an ability. It’s the little things which count extra.”

While in Limerick, Bernard visited the old boxing hall and spoke with young boxers in the youth centre at Ballynanty.

“The impact this club could have in the grand scheme of things, it’s a small amount. If you could impact on one young person in this neighbourhood and allow them to possibly achieve any sort of success, then it’s priceless. It would make a huge difference. It would challenge younger people to be more than anything which is expected of them,” the former champion told the Limerick Leader.

The boxing star also used his visit to Limerick to visit St Francis’s Boxing Club, an organisation which has enjoyed recent investment, allowing them to re-open their own hall.