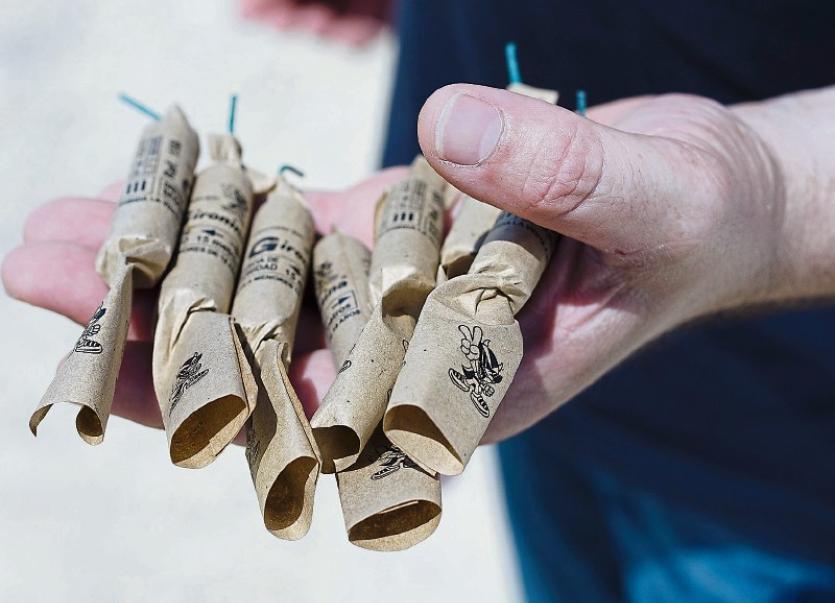 GARDAI have issued a warning to people not to use fireworks in the build-up to Halloween following three incidents in County Limerick, one of which resulted in residents of an apartment block being treated for smoke inhalation.

It’s understood that a firework was put through the letterbox of an apartment block in Kilmallock which resulted in rubbish in the hallway catching fire.

“Four people in the apartments upstairs were treated for smoke inhalation by fire brigade and ambulance personnel,” said a local.

Gardai have confirmed that they are investigating a fire that occurred in an apartment complex in the town at approximately 9pm on Thursday last.

“No arrests have been made and the investigation is ongoing,” said a garda spokesperson.

“Fireworks are illegal and there are serious penalties for the possession of same - €10,000 fine, five years in prison, or both. Fireworks can cause serious risk of injury and can also cause distress to neighbours, pets and other animals,” continued the garda spokesperson.

Meanwhile, gardai have confirmed they are investigating a criminal damage incident that occurred at a house on Clash Road, Abbeyfeale. While no arrests have been made, the investigation into the incident is ongoing.

A pensioner who contacted the Limerick Leader this week explained how his rear double glazed window was shattered by a firework, known as a thunderbolt.  This occurred last Friday night.

“Prior to this incident, the place was like a blitzkrieg in a war zone, with gangs of children running amok letting off these dangerous fireworks with gay abandon,” he said.

“I think these children are taking advantage of the fact that Abbeyfeale Garda Station is closed. It only opens for one hour of business during the day,” he said, adding that other areas in the town have also been targeted.

“My question is, why do many of these parents give their children money to buy these dangerous fireworks, and they don't supervise them to act in a responsible manner? Are these fireworks being bought for intimidation and not recreation?” asked the 66-year-old.

“I’ve priced the repair of my window and it’s going to cost €250. It was an upstairs window and it appears the firework was thrown horizontally from someone on the top of a shed.

“They are also firing eggs and fireworks into pubs. This all comes at the same time as the incident involving the teenager in Cork,” he added.

A 14-year-old girl was seriously injured on Sunday and taken to  Cork University Hospital after a firework she had been playing with exploded.

The girl underwent emergency surgery and is understood to have lost a number of fingers on one of her hands as well as suffering serious facial injuries.

She was given first-aid treatment by staff members at a nearby pub before emergency services arrived at the scene.

A garda investigation is underway.

Meanwhile, gardai are investigating damage caused to an unoccupied house in Newcastle West as a result of a fire. It is understood that children were seen in the vacinity with fireworks prior to the incident. See page 10 for more.