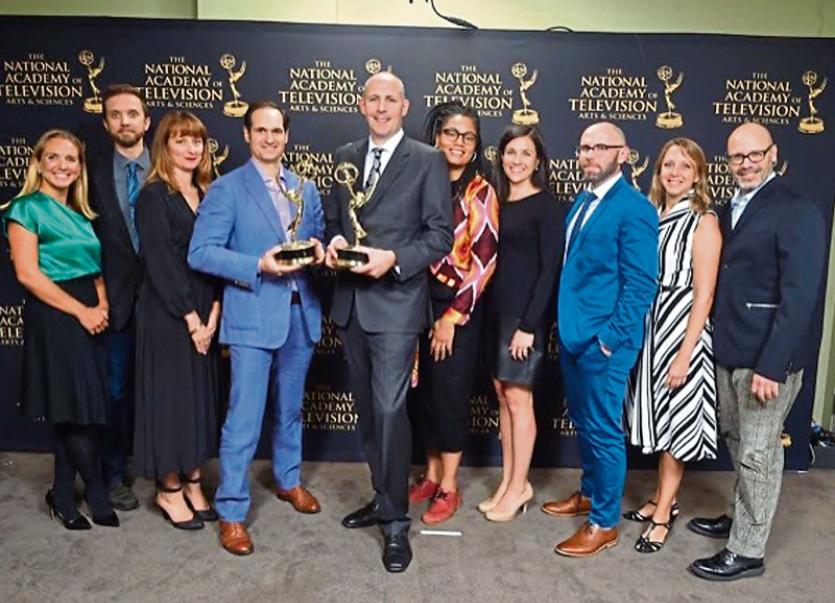 Malachy Browne, centre, with members of his team at the Emmy awards

ANOTHER Broadford journalist is making his mark in the world of investigative journalism.

Earlier this week, Malachy Browne, a multi-media journalist and senior producer with the New York Times, and his team won an Emmy Award for an investigative film documentary into the Las Vegas massacre of 2017.

Malachy Browne is the nephew of Vincent Browne, journalist and broadcaster.

Malachy and his team were presented with the prestigious award exactly one year to the day after the massacre took place in which 58 people attending a concert were gunned down and slain. Called 10 Minutes, 12 Gunfire Bursts, 30 Videos, Mapping the Las Vegas Massacre, the film won the Outstanding New Approaches: Current News award.

It is an investigation which tracks the timeline of the shootings, using mobile phone footage and CCTV footage and puts viewers right at the heart of the rampage,  knowing how it felt with nowhere to go to escape.

“This award is a reflection of The Times’ commitment to investing in innovative storytelling, the kind that has allowed the video unit to build an industry leading open-source investigative team,” Nancy Gauss of Video said.

Malachy was the senior producer on the documentary film along with Drew Jordan, Nicole Fineman and Chris Cirillo. He has been with the New York Times since 2016.

Before that, he was managing editor at the award-winning start-up Reported.ly, the social reporting arm of First Look Media. He led exclusive investigations into the active export of Italian arms used to bomb Yemen, and the relocation of asylum seekers in the Calais ‘Jungle’ camp around France.

Malachy worked as news editor at the news agency Storyful for almost four years. He is a member of the Technology Advisory Board of the Prosecutor’s office at the International Criminal Court and is a founding member of First Draft Coalition, a group of thought leaders who provide training and analysis of social journalism.

He is a director of Right to Know, an Irish organization campaigning for access to public information, and Uplift.ie, an Irish campaigning organisation that coordinates people-powered action.

Malachy created and edited Politico.ie (2009), an Irish political website and magazine archive. His journalism career began in 2006 when he worked on Village, founded by Vincent Browne.

Formerly a computer programmer, Malachy uses technology to power journalism and human rights work. He is the son of David and Mary Browne of Broadford.