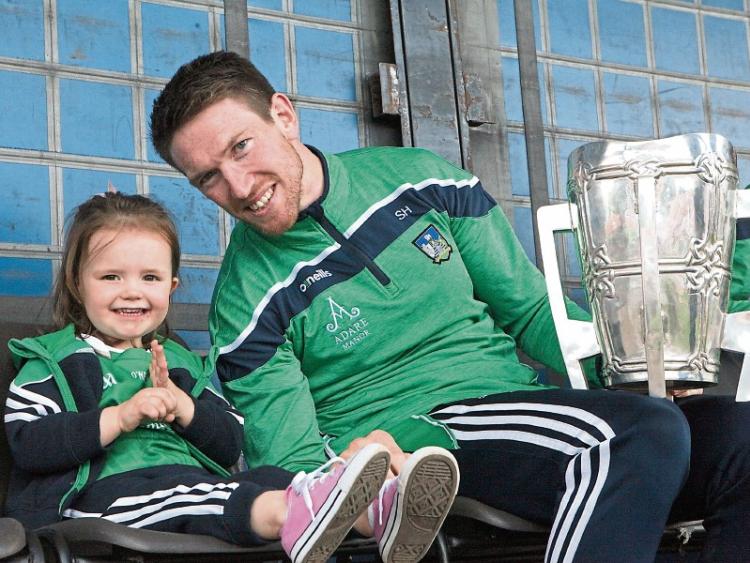 THE EVERLY Brothers’ song, Bye Bye Love rang out after the tractor run in Murroe on Sunday.

“Bye bye happiness, hello loneliness, I think I'm-a gonna cry-y”. The lyrics couldn’t have been more more out of place. The sun was shining, everyone was smiling, tractor engines were revving and Seamus Hickey brought the Liam MacCarthy Cup home.

With military precision tractors left the village just before 2pm after organisers had raised thousands for Down Syndrome Limerick.

Then it was time for Seamus Hickey, accompanied by Diarmaid Byrnes and Cian Lynch, and the triumphant Murroe-Boher U-12s to bring the Cup in to Harty Park.

Their mode of transportation was a vintage tractor and trailer borrowed from the run. Murroe-Boher GAA Club and tractor run organisers deserve great credit for how well the day was organised, and Sergeant Helen Holden, Garda Tom McGlinchey for keeping traffic flowing.

Seamus took the stage with his daughter Anna as some 1,200 fans cheered and clapped for one of their own.  Paul Coffey, MC, said countless people have said to him they were absolutely delighted Seamus Hickey won an All-Ireland medal.

“You’re there a long, long time and you have given great service over the years. Everybody here will 100% back me up on that,” said Paul.

The loudest cheer of the day went up. Since 2006, Seamus has played corner back, full back, half back, centre back, midfield and at half forward. Wherever he was put he gave his all for Limerick.

“I didn’t dream of a homecoming, I didn’t dream of standing in front of Harty Park where we trained for so long at underage. This is surreal, this is incredible, I owe it all to lads like Cian and Diarmaid who played so well throughout the year. I am delighted they came and I’d like to thank them for coming,” said Seamus.

He recalled being seven in 1994 and nine in 1996 when Murroe-Boher GAA men, Owen and Sean O’Neill were playing with Limerick.

“I’ve idolised the players that have come from this club that have played for Limerick - James  Butler, the Tobins. I was blessed to play with the Tobins, all three of them [Seanie, Kevin and Pat] for so many years in the Limerick senior set-up. I’m just blessed to be one of the 36 lads who actually won an All-Ireland medal,” said Seamus, who spoke of the “passion and energy” the children in Murroe and Killinure National Schools have for hurling.

Seamus could see himself in all the young boys and girls in the schools and running around Harty Park with hurleys.

“When I got to play my first game for Limerick it was a primary game. I got the bug and it just took off. I never wanted anything else only to play senior hurling for Limerick. I’ve been blessed, I’ve been to a minor final, I’ve won a Munster medal – all those things along the way are part of the bigger dream of playing for Limerick. All I wanted to do was to wear the green and white until somebody else took it off me. I’ve been blessed to have been part of something really successful but the journey is the most important.”

Liam MacCarthy is in @MurroeBoher Huge crowds in attendance! pic.twitter.com/Q6rKUfb39s

Seamus, Diarmaid and Cian were joined on stage by the Murroe-Boher U-12s who won the Tom Blake memorial tournament in Ahane on Saturday and the Liam O’Donoghue tournament on Sunday.  Seamus had a message for those players and all the boys – “Dream big and folllow it”.

And here they are in @MurroeBoher as the sun beats down pic.twitter.com/1alKVzIltp

“It doesn’t matter what you win or achieve or lose along the way, it is the dream and journey of getting there. Never give up on it. Keep practising, keep dreaming and keep working. This is an amazing thing to be part of and to be home here is humbling,” said Seamus, who cut the ribbon on the new €85,000 ball wall/astro turf area with the chairmen of Murroe-Boher GAA Club and Bord na nOg, Paul Byrnes and Owen O’Neill.