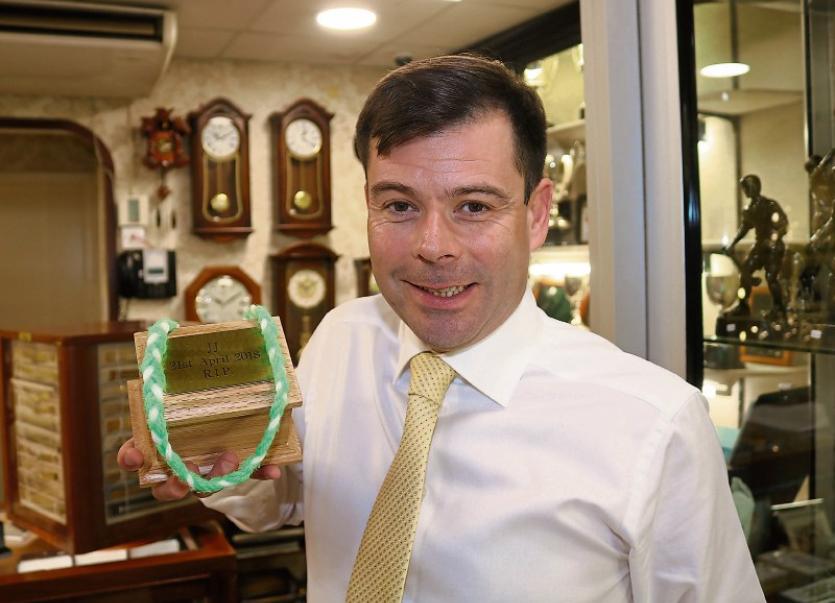 WHILE the official attendance at the All-Ireland hurling final was 82,300, there was an extra soul in the stadium.

The  businessman JJ Kenneally, who dedicated 70 years of his life to Limerick GAA, said he would never again see his county bring home the Liam MacCarthy Cup.

And by the popular jeweller’s bedside at Milford Hospice, his son Robbie told him: “I bet you they will win this year.”

Sadly in April, months before the boys in green claimed the historic victory, 88-year-old JJ—a jewel in the crown of Limerick’s business and sporting community—died after a battle with lung cancer.

But his loving wife Carmel made sure that he was going to be with her in spirit during the All-Ireland hurling final win this year.

That is when she decided to bring JJ’s ashes in an urn to Croke Park, to be with her, the family and the thousands of elated Limerick supporters.

Robbie, who runs the family business, JJ Kenneally’s on Wickham Street, says the family would regularly go to matches.

“Subsequently, when he was no longer alive, she [Carmel] says: ‘Sure, I’ll bring your father with me. I’ll bring his ashes up.’”

And when they arrived at Croke Park, someone had said to Robbie: “Jesus, wouldn’t your father love to be here now today?”

Robbie replied: “Sure, he is, he’s inside in her handbag!”

Limerick’s incredible win, when the ref blew the final whistle, was a poignant moment for Carmel and the family.

The late Corbally man, a stalwart of local sport for most of his life, was president of St Patrick’s GAA, Limerick Athletics Club and Fairview Rangers.

Robbie described the moments after the final whistle: “She stayed until the end. Normally, the way you would be rushing off, you know the way people, the minute the whistle blows, they rush. She shed a few tears and had a moment.

“She took it all in, listening to the Cranberries, the whole lot.”

He added that it was important for his mother to be at the big game “as my father would have been involved in the GAA for 70 years, so it was great”.

On the week of JJ’s death, Robbie told the Leader that JJ and his wife Carmel were a “great couple”, who celebrated 54 years together, raising four children, Robbie, Clive, Fergus and Olive.

“He used to make my mother breakfast in bed every morning before he would leave.

“And the biggest thing he would have given us would be to be hard-working,” Robbie said in April.

Robbie keeps his father’s ashes in a special box in the popular city centre store.