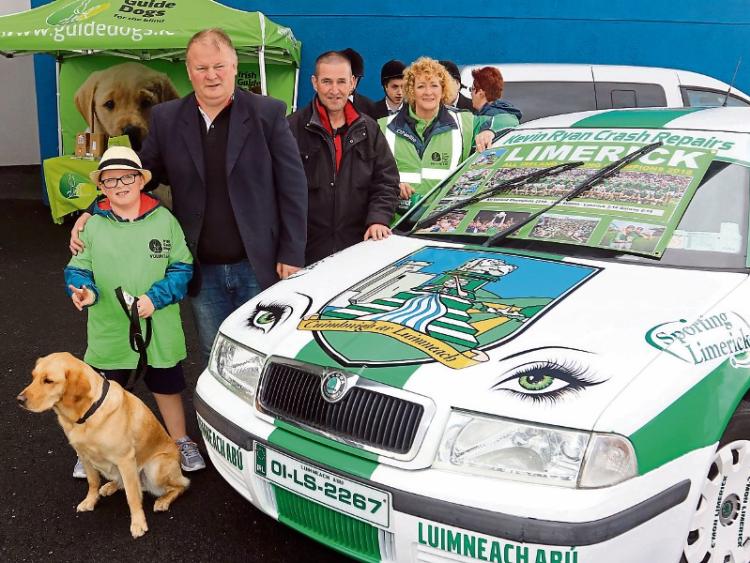 NEITHER the Pope or the man above was very kind to Limerick Show this year.

God’s representative on earth attracted many regular attendees and heaven’s bath water being emptied on Sunday morning didn’t help matters but the show must go on! And go on it did with some 15,000 parking up in Greenmount.

“The weather hasn’t been overly kind but the Pope had to put up with it too! Considering everything we’re very happy with the attendance. When you looked out the window this morning you wouldn’t be inclined to get out of the bed but people understand the facilities at Limerick Racecourse are excellent. We’re very lucky.

“The trade hall is packed and there are some great stands. If there is a shower of rain they can go in and browse around. The outdoor trade stands are well geared for all types of Irish weather,” said Mr Walsh.

He continued: “There is a great buzz here today continuing a great week of celebrations. On behalf of Limerick Show we would like to congratulate the Limerick hurlers and hopefully they will be back with the cup next year!"

Along with the traditional attractions of the very best  of cattle, horses, show jumping, sheep, dogs, goats, poultry, arts and crafts, photography, baking, horticulture, entertainment and  ‘kidz zone’, there were new offerings this year.

The drop of rain didn’t bother athletes in the inaugural Munster Mile and 5k run by Dooneen AC on the race track. A jiving competition and music by Shaun O’Dowd in a marquee was well sheltered by the elements. It was hopping!

While there was a huge amount of stalls in the food village to suit even the pickiest eater. The parade featuring Mayor of Limerick City and County James Collins, Miss Limerick Beibhinn Haren, CBS Pipe Band and led by the men and women of Oglaigh Naisiunta na hEireann added to the spectacle as it wound through the grounds.

Richard Kennedy, show chairperson, said they were delighted with the new attractions.

“It is tremendous. This is a social occasion, it is so important to keep it going and we want to try and develop it more. If people have ideas come to us. All in all we are very pleased. There is still a good crowd and there is a good atmosphere,” said Mr Kennedy. As the IFA deputy president he was delighted with the rain for farmers he just wished it could have waited one more day!

The move to a one day show last year has proved a winner.

“This is the second year of the one day show and it is here to stay as a one day show. We’re delighted with it and hopefully we will move on the show again,” said Mr Kennedy, who added that the event is run with the co-operation of “so many people”.

“I couldn’t thank them enough. It is part of our heritage. I’ve been going to the Limerick Show since I was a child and I want to see it continuing,” said Mr Kennedy.

Mayor James Collins said the Limerick Show, as well as the concerts in Mungret and King John’s Castle, rounded off a fantastic week. He and Cllr Noel Gleeson and Cllr Sean Lynch went on a walkabout where everyone was congratulating Sean on his son Cian’s performance and the Limerick team’s.

“We were in Patrickswell last night  for the homecoming - there was a great crowd there. You have to celebrate your victories and enjoy it. I know it is raining but everyone is positive.

“I have great memories of Limerick Show. My sister Michelle used to showjump and we had ponies when we were growing up. We used always come to the dog show. It is fantastic day out,” said Mayor Collins, who was joined by children Eoghan, Thomas, Daniel, and Beibhinn. His Beibhinn, who was proudly wearing her Limerick jersey, even got a pic with Miss Limerick Beibhinn Haren. Beibhinn Collins was one of many to wear the Limerick jersey with pride exactly seven days on from the All-Ireland.

One man doing a brisk trade throughout was Galway man Damien Larkin, of TJ Larkin hurls.

“There is great interest in the hurls with Limerick. It is great to see Limerick coming back up again. They didn’t win an All-Ireland for so long - it is great. We know what it is like after year,” said the gracious Galway man. “We’ve been coming to Limerick Show for seven or eight years and this is out busiest year ever,” said Damien.