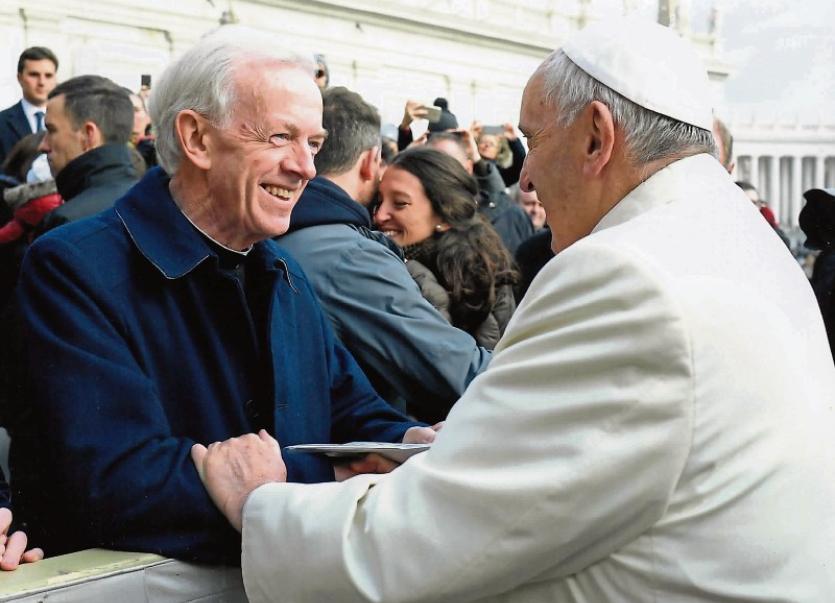 Fr Tomás O’Donnell, who has worked in Argentina for the past 42 years, meets his former bishop, now Pope Francis

WHILE Pope Francis is in Ireland for a much-talked about visit, the Limerick man who worked under him for many years when he was Bishop Bergoglio of Buenos Aires was unfortunately not there to welcome him.

But Templeglantine-born Pallotine priest, Fr Tomás O’Donnell, who has spent the last 42 years in Argentina, recounts here some of his impressions and memories of his bishop, the man who is now Pope.

“On the day of his consecration as Bishop he came across as dour and distant but it wasn’t long before I changed my mind about my first impression of him,” Fr O’Donnell said.

Buenoes Aires, he pointed out, is a city of 200 parishes and 1000 priests  yet, he said: “Bishop Bergoglio knew each one of them by their first name and was a regular visitor to every parish, prison and homes for the elderly and underpriviledged.

On Holy Thursday he would visit the prison in Vila Devoto and wash the feet of 12  inmates and then join them for maté, a herbal tea traditional to Argentina.”

And when the Bishop was due at Fr O’Donnell’s parish for Confirmation, “he declined the offer of transport and opted to come under his own steam, firstly by train and then by bus No. 76.”

Bishop Bergoglio,  Fr O’Donnell said, on that occasion recalled his many visits to the parish but said  his most poignant memory was of the funeral Mass for the five Pallotines  who were killed by the military on July 4, 1976.

“He had been spiritual director to Fr. Alfie Kelly, one of the slain whose grandparents emigrated to Argentina from Westmeath.

“At a Mass to commemorate those who died he said that the parish ‘had been blessed by the lifestyle of those who lived  together and died side by side. I got to know them through Fr. Alfie who had a kind and generous heart’,” Fr O’Donnell recalled.

He also recalled  a fierce fire that took place in a dance hall in the centre of Buenos Aires in 2004.

The then Cardinal Bergoglio, he said, met with their family members and supported their cause and fight for justice.

“If he couldn’t meet them in person he ensured that an auxiliary Bishop met them in his name. Thanks to his support and encouragement those responsible were imprisoned and the families got some compensation.”

His free time, Fr O’Donnell recalled, was spent visiting the priests and the sick who were housebound, browsing in bookshops, walking Avenido de Maya, and enjoying two portions of pizza and a glass of wine on his way home.

“These meagre indulgences he missed, ‘being away from his dear Buenos Aires’ - as he mentioned in a recent interview.”

Fr O’Donnell met Cardinal Bergoglio in  2010 when he accompanied his superior Fr. Jacob Nampudakam S.C.A  who was on a pastoral visit to the Pallotine communities in Argentina and asked to meet the Cardinal.

“On leaving him he accompanied us to the street below, showed us some of the sights of Plaza de Mayo, thanked us for visiting him and bade us ‘Adios’.

“He had a very positive relationship with other creeds based on dialogue and praying together in public,” Fr O’Donnell added.

“The humility of the man and his lack of value on worldly goods is demonstrated by his silver episcopal ring and his well-worn old black shoes - the latter he requested to be sent to Rome from his bedroom in Argentina,” he continued.

“When requested by a bishop to appoint 12 monsignors for a particular diocese he refused saying that ‘All priests should be treated equally’.

“On his birthday he shares breakfast with a group of homeless people and they are invited to stay on and cut the birthday cake with him.

“He has made sure that those who live rough in the area are provided with proper toilets and hygiene facilities, giving these unfortunate people proper dignity.”

The hallmarks of the Pope, Fr O’Donnell said, are his humility, his humanity, his kindness, his generosity and his strong faith.

“Without a doubt since being elected he has not changed his lifestyle but has shown a humbler, less formal approach to his office than his predecessors - a warm style that has been referred to as “no frills”.

His common touch and insistence that the church be more open and welcoming has quickly endeared him not only to Roman Catholics but to millions of others around the world.”