Doon GAA in County Limerick celebrates its own Fantastic Four 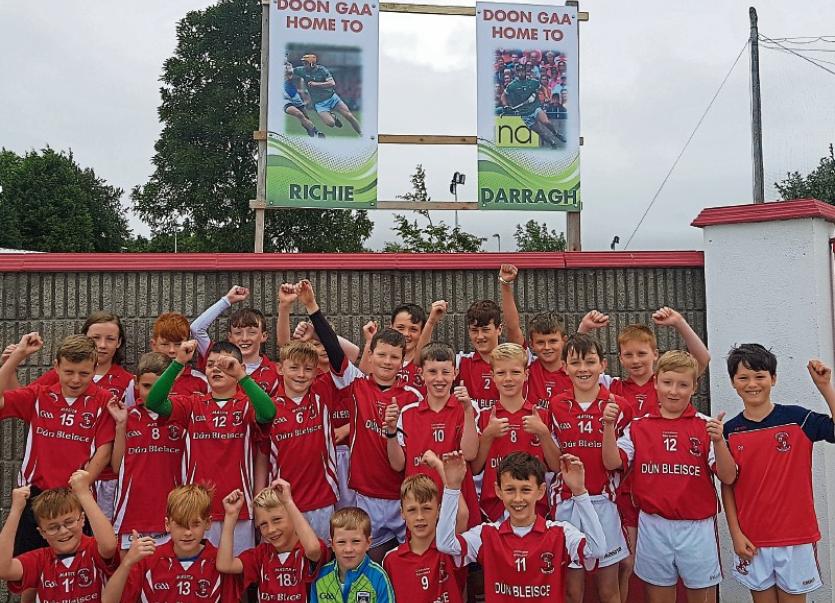 EVERY GAA club in County Limerick would be proud to have one player involved with the senior hurlers on All-Ireland final day but Doon has four.

Dozens have been placed in shop fronts in the village situated close to the Tipperary border.

However, visitors could be in no doubt that they were in Limerick as the village is decked out in green and white. The same can be said of Oola where Darragh is from.

Neily’s bar went all out with a green and white painted car.

All four players have been instrumental in getting Limerick to the All-Ireland final. Richie’s staunch defence, Darragh’s tireless work in midfield and key sideline cuts, while Barry’s and Pat’s goals were instrumental in nailing Tipperary’s and Cork’s coffins shut.

To show their appreciation, Doon GAA Club has erected giant signs wishing their men and the team the very best.

Schools and businesses are also a riot of colour. Doon Men’s Shed used their carpentry skills to make a special Up Limerick sign.

“We’re so proud of them and the whole Limerick team. The four Doon GAA lads are all lovely young fellows. They give so much back it is unbelievable,” said Audrey.

Club secretary Declan Ryan came up with the idea of children drawing posters and now they have been placed in a number of shop fronts.

“They are still coming in. The kids are on a high,” said Audrey.

The phone of every club officer in the county has been hopping with people looking for tickets.

Audrey said: “There is a massive demand but people are getting them from far and wide which is great.”

All-Ireland final day will be a special day for everyone in Doon and they are right behind their four club men.

Little did Br James Dormer know 11 years ago when he trained the four Doon lads to a county U-12 hurling competition win that they would be running out in Croke Park.

“That was a great team. Everybody is so proud of them. The atmosphere is electric in Doon at the moment not to mind Croke Park,” said Br Dormer, who despite being a Dub is praying for a Limerick win over Galway.