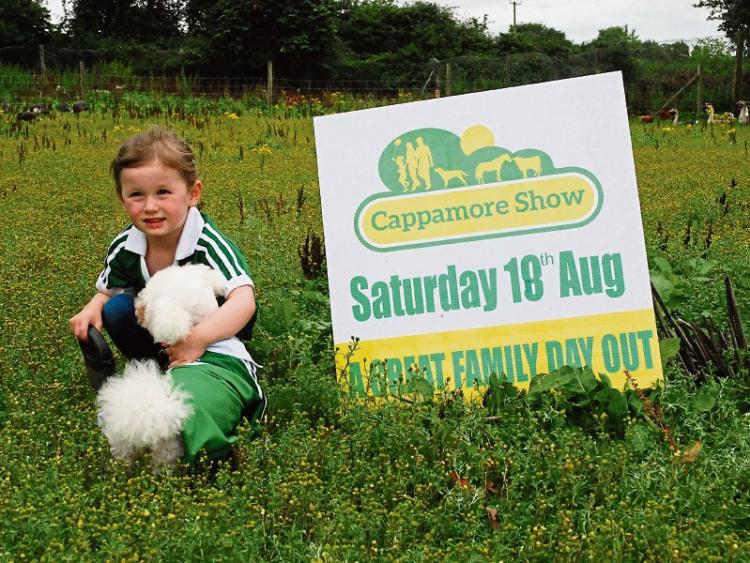 Big weekend ahead: Young Arwen getting her dog, Dolly, ready for Cappamore Show and the All-Ireland final

THOUSANDS will head to Cappamore Show on Saturday before making their way to the capital on Sunday.

Last year’s event coincided with the U-21 All-Ireland win, which involved many of the same Limerick players who will run out on Croke Park. Cappamore Show organisers hope history will repeat itself this weekend.

“Cappamore then Croker!” they say.

Everything is in place for their 64th show. Despite heading for pension age, Cappamore Show is still innovating and adding new attractions.

There will be no need to make ham sandwiches like you will for Croke Park due to the Limerick Food Experience. The best quality food and drink that the county has to offer will be showcased by over 15 food producers. In addition, there will be two cookery demos in the special marquee - one from Tom Flavin, executive chef, Limerick Strand Hotel and the second from celebrity chef Edward Hayden.

The over 120 strong committee and even more volunteers have been working to ensure the showgrounds in Ballyvoreen is in tip-top condition. It got very muddy in places last year due to heavy rain but there is no fear of that on Saturday due to the drought.

At 2pm there is a very important forum on fodder and mental wellbeing organised by the show committee,Teagasc, Dairygold and farming organisations. Speakers are Minister for Agriculture Michael Creed, Dairygold CEO Jim Woulfe, from Ardagh, and former Ireland and Munster great Tony Buckley, who has publicly discussed his battle with depression. It will be chaired by Limerick IFA chairman, Shay Galvin. Joe Healy, IFA president, is also expected to attend. Due to the drought fodder reserves are at an all time low.

Paddy Ryan “Luke”, show secretary for 60 of the 64 shows, said they are putting this on because it is a community event and they are based in a rural area.

“A big number of our community would be of farming stock. Anything we can do to alleviate the hardship of our fellow man I feel it is incumbent upon us to assist them,” said Mr Ryan.

He says some people ask why go to all the bother and trouble of organising a show.

The very best of rural Ireland will be on display on Saturday at Cappamore Show and hopefully a brilliant display by the Limerick hurlers will be on show on Sunday.