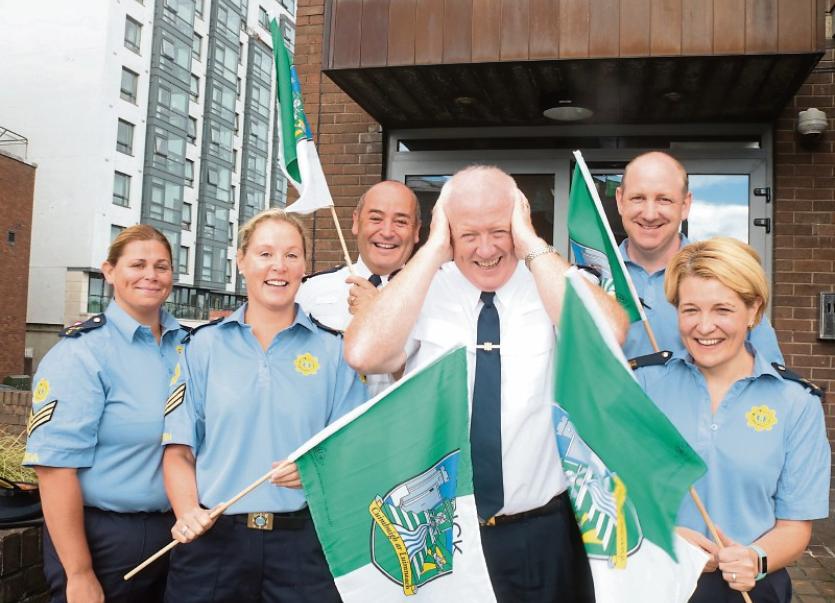 The Limerick roar is too much for Chief Supt Gerry Roche from Galway. He is pictured with Sgt Ciara McMahon, Sgt Michaela Moloney, Supt Derek Smart, Sgt Sean Murray and Garda Sharon Ivory

However, his predecessor - Assistant Commissioner David Sheahan - would like to see the priceless cup robbed from their hands and returned to Limerick after 45 long years. 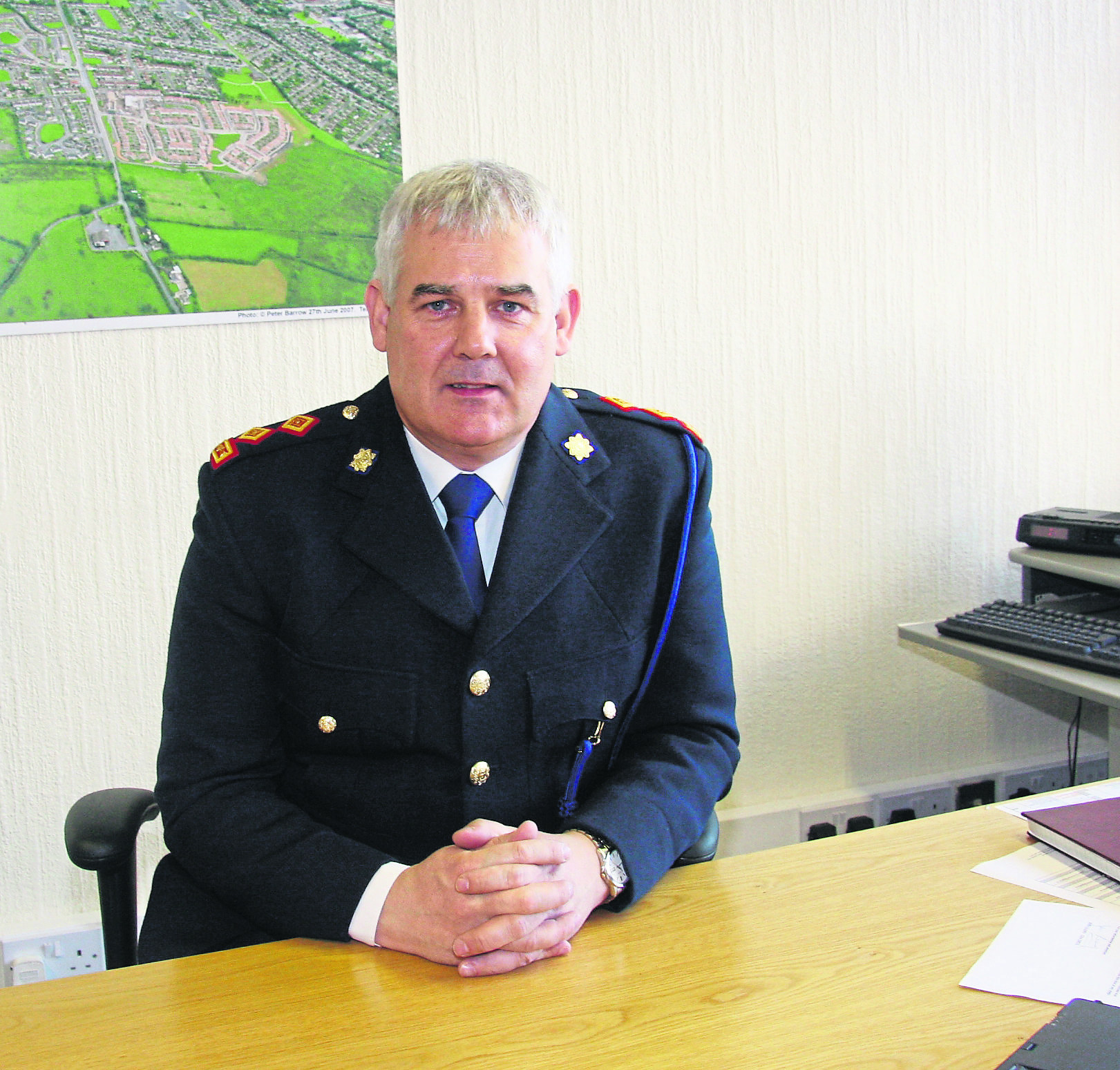 Chief Super Roche hails from Duniry in east Galway and is a massive hurling fan. Sources deep within Henry Street revealed to the Leader that when he came to Limerick he brought a Galway 2017 All-Ireland hurling final champions poster with him. It is proudly displayed in his office. GSOC are investigating!

But as can be seen from the photo, Chief Supt Roche has been subject to a barrage of banter in the run-up to the final. One of his top men - Newcastle West Superintendent Eamon O’Neill is even part of Limerick’s logistics team.

Chief Supt Roche is currently on the hunt for criminals, and tickets for Croke Park on Sunday.

Oh, I'm an alien, I'm a legal alien, im a Galway man in Limerick! Chief Supt Roche (a proud Galway man) & the crew from Henry St in Limerick ahead of #GALvLIM Remember no matter what the outcome of the #AllIrelandFinal enjoy the day, mind your belongings & be safe. #Streetwise pic.twitter.com/kp2u44S6gY

Limerick station is decked out in green and white…are the
Gardaí in Galway up to the challenge? # #AllIrelandFinal #GALvLIM

“I hope Galway do it but I wouldn’t begrudge it to Limerick now either. I would be happy enough if Limerick did it. They are two great sporting counties - it doesn’t matter who wins. May the best team win,” said Chief Super Roche, who shoots a hole in the fact that Galway are strong favourites with the bookies.

“Clare nearly beat us. There was only a puck of a ball in it so you can never tell,” said Chief Super Roche.

One woman in the photo is Limerick through and through. Sgt Michaela Moloney’s father - Tony Moloney - was the manager of the Kilmallock senior hurling team that reached the All-Ireland club final in Croke Park in 1993. Galway’s Sarsfields won that day so she and all Limerick fans are hoping for a reversal in fortunes.

A 16-year-old Gerry Roche was at the 1980 All-Ireland final when Galway defeated Limerick.

Funnily enough so was the man he would replace as the head of the Limerick Garda Division, David Sheahan.

“I was on the Wexford minor team in 1980 when we were beaten by Tipperary. I would have played in the forwards for the whole championship but I played cornerback that day. I marked Nicky English - he was a handful,” said the Assistant Commissioner for Roads Policing and Major Event Management.

He was back in Croker in 1996 to see Wexford beat Limerick.

“I remember sitting up in the Cusack Stand in 1996 and there were tears of joy flowing at the end of it. There was a fellow who came over and put his arm around me. He was a Waterford man I would have known, he was a great age. He turned around and said to me, 'I'd give anything for this to be Waterford'. It means so much.

“It'll be wonderful if Limerick are successful because there will be a lot of grown men who will shed tears on the day. That's what it means to everybody,” said Asst Comm Sheahan, who will be cheering on the Treaty men on Sunday.

He vividly remember Joe Connolly [Galway captain] in 1980 and the speech he gave that day in Croke Park.

“I’d give anything for the same oration to be given by the captain of the Limerick team.

“It is my adopted county. I spent 10 years of my service there. I still have fond memories of the place and always will have. It will always have a special place in my heart.

“They'll put their best foot forward, they have done a serious amount of work - John Kiely, the whole management team and all the panel. I wish them well and I hope they can bring it home,” said Asst Comm Sheahan.

Knowing the two Doon GAA lads even helped when Asst Comm Sheahan was investigating the hay barn fires in east Limerick in 2016.

It allowed him build trust with locals who were living in fear.

“The power of the GAA cuts across a lot of divides and breaks down a lot of barriers.

“It unites a community in more ways than you can ever imagine.

“That bond of friendship extends beyond parish and county boundaries. It cements relationships and friendships,” said Asst Comm Sheahan.

Looking ahead to Sunday when up to 40,000 Limerick fans will descend on the Capital, the garda chief has issued a special one-off decree around Croke Park on Sunday - there will be no parking fines placed on Limerick reg cars, well sort of!

“I’ll be like Pat Shortt now - provided the cars aren't parked on top of the gate of Croke Park!" he laughs.