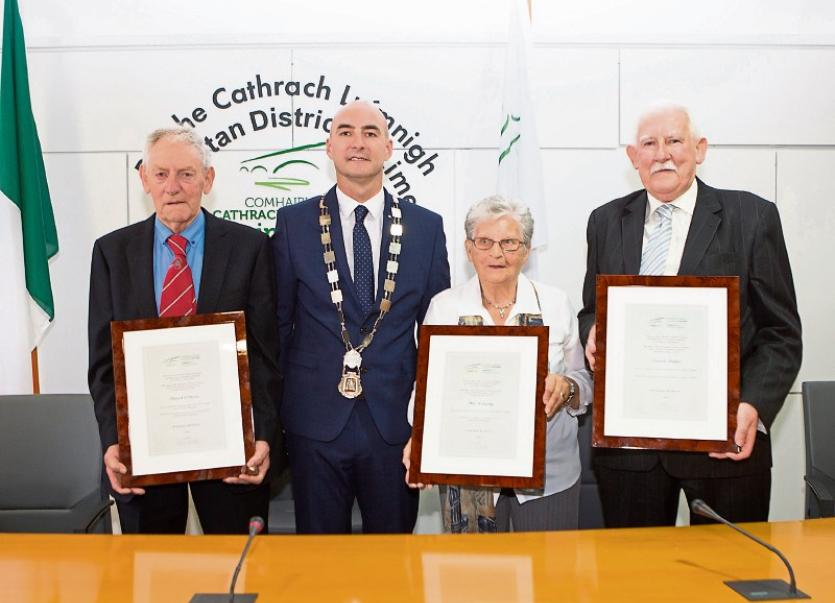 Cllr Butler gave a special reception to Pat Halpin, who has served Moyross soccer for over 40 years. He also honoured Pat O’Brien for his service to GAA, in particular in the Mungret area.

And Garryowen lady Phil McCarthy, who is celebrating 50 years with the Limerick Community Games was also afforded the event.

Cllr Butler, who was elected to the role of metropolitan mayor earlier this summer, described the trio as “model citizens,” and said he will have no easier decision to make than to honour them during his year in office.

“All three have without expectation of gratitude or recognition served their communities through sport for decades positively influencing the lives of many hundreds if not thousands of young Limerick people,” he stated.

Delighted for my first Mayoral Reception to be able to honour Pat O'Brien of Mungret St Paul's GAA, Pat Halpin of Limerick FAI and Phil McCarthy of Limerick Community Games. Combined they have in excess of 150... https://t.co/5wNiaGVW55

Speaking at the reception, Cllr Butler said: “Pat Halpin has served as a coach both in a voluntary and professional capacity with the FAI for over 40 years and holds the incredible record coaching the last Limerick winners of the Kennedy Cup. He also proudly was central to the establishment of women’s football in Limerick also and indeed his contribution to special Olympics football was also recognised.”

He added: “​Phil McCarthy this year celebrates her 50th year of her work with Limerick Community Games. She shows such wonderful commitment in all weathers to all events and each and every participant. Cllr Michael Sheehan recalled a time she drove a single participant all the way to Dublin to take part in drafts competition never wanting to let anyone down.”

“Pat O’Brien now still active in Mungret St Paul’s GAA Club has served incredibly over 60 years of his life to the club and its members and indeed the wide GAA and Limerick community. Pat has served every role a club has over those years including as a player and was remembered by club presidents as a man on whom the club was built,” he added.

Cllr Butler said: “It is people like this that Limerick is built on, people who silently serve but loudly speak in their example through action. We may see their likes again but today we honour them, thank them and hold them on our shoulders as heroes of Limerick.”