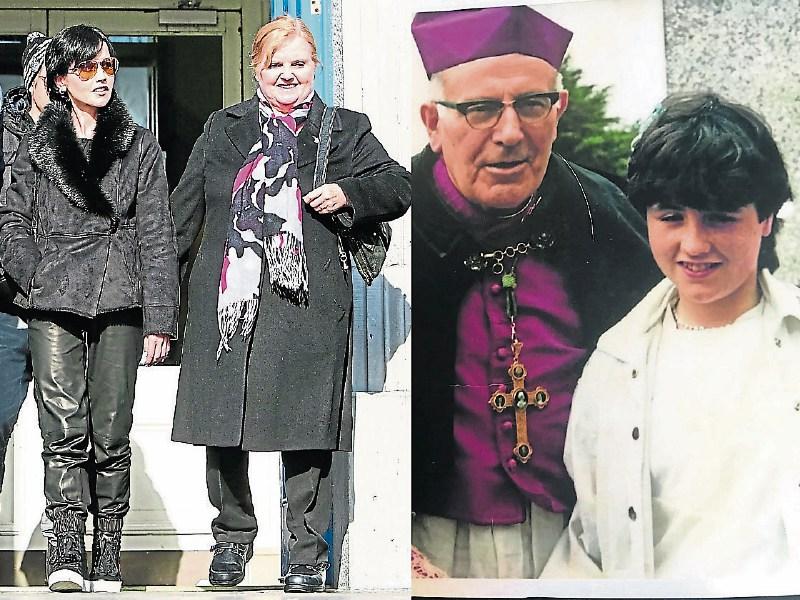 Left: Dolores pictured with her mother Eileen in 2016 and right, with the late Archbishop Thomas Morris at a confirmation ceremony at Ballybricken Church

THE MOTHER of Dolores O’Riordan has recalled her last moments with the late rockstar on the day before her death in a London hotel room.

Speaking exclusively to the Limerick Leader this week, Eileen O’Riordan also warned young people of the hidden cost of fame which she said “goes against nature”.

Eileen last spoke to Dolores via phone at 2am on the morning of her death in a hotel in London on Monday January 15. Dolores had been at home in Ballybricken with Eileen on the previous Saturday

“I was talking to her at two o’clock in the morning. We would be chatting all the time. I got a call around nine o’clock the same morning that something was wrong,” Eileen explained.

“It was a couple of hours before I knew what happened. It didn’t sink in. Immediately when I knew she was dead I wanted to make sure they got a priest to her. The priest went to the morgue. I didn’t fly over.”

The mother-of-seven said there had been only one day since Dolores died “that I thought I wouldn’t be able to go on.

“Just once, since she died, that nothing would console me. But I always have someone to turn to,” said Eileen.

Eileen last saw Dolores on the Saturday prior to her death. The lead singer of The Cranberries called out to the home she grew up in - a picturesque converted cottage on a narrow country road in Ballybricken - and gave her beloved mother a Fitbit and a pair of knee-high Doc Marten boots.

“She only went to London on the Sunday. I caught her by the hand when she was leaving I remember and I wished her good health,” Eileen recalled.

“She had a few health complaints including back problems. I felt sorry for her.”

Dolores, who had been in the public eye for more than 25 years, rose to fame in the 1990s as lead singer with The Cranberries. The band enjoyed huge success with tracks such as Linger and Zombie and went on to sell over 40 million records worldwide.

The trappings of international fame however, rested uneasy on the shoulders of the delicate Dolores.

“It’s against nature, isn’t it?” said Eileen of fame.

“It can bring its own stresses and when you are very famous then you have no life. You make true sacrifices really. She could go nowhere. Anywhere she went she was recognised - anywhere in the world!”

Eileen hopes that Dolores’ three children Taylor, 20, Molly 17 and Dakota, 13, follow their own path in life.

“When people say that Dolores’ children, my grandchildren, would follow in her footsteps - I would hope not,” she admitted. “Keep things a bit simpler. I know she did an awful lot of good in her life - no one knows the amount of good she did. All the letters I have with people telling me, ‘I wouldn’t be here only for Dolores. She saved me’.”

- See the weekend edition, out now, for the full interview with Eileen O'Riordan