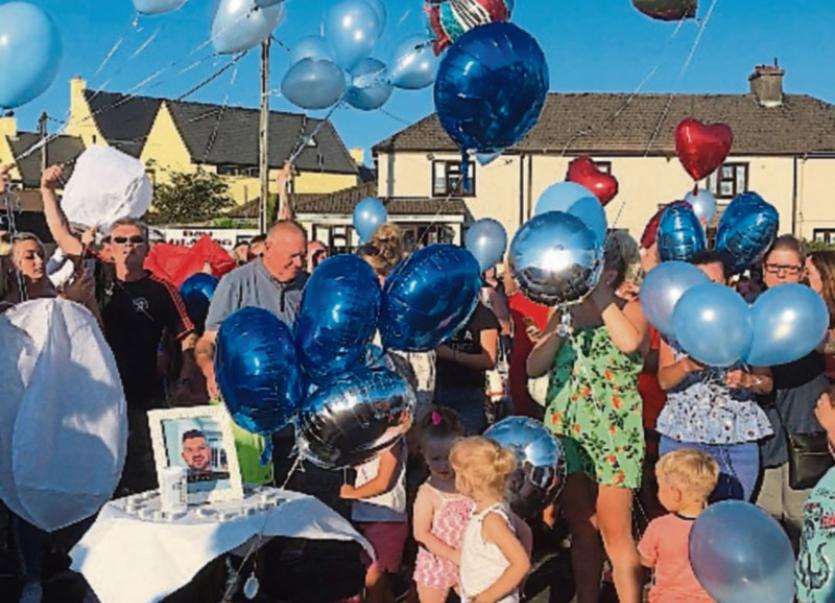 THE BEREFT community of Kileely held a special remembrance ceremony for the popular Patrick ‘Pa’ O’Connor, who was fatally stabbed at his local pub in Limerick city at the weekend.

Patrick, aged 24, was fatally stabbed at Fitzgerald’s Bar on Sexton Street North by a man shortly before midnight on Saturday, after spending the evening watching the World Cup matches.

The Pallas Foods staff member was rushed to University Hospital Limerick, where he was later pronounced dead.

And as the heartbroken family were arranging Patrick’s final farewell, hundreds of friends, neighbours and locals gathered the Kileely roundabout, also known as The Ring, where a special remembrance ceremony took place on Monday evening.

By 8pm, around 300 people from the devastated northside community were bound together, showing solidarity for the family of Patrick O’Connor, who will be laid to rest on Friday morning.

As part of the ceremony, more than 100 blue balloons and one balloon saying “PA” were released into the cloudless, blue sky as Puff Daddy’s I’ll Be Missing You played through a speaker next to a framed photograph of Patrick.

Funeral arrangements for Patrick were announced on Tuesday afternoon.

Patrick will be reposing at Cross’ Funeral Home, Gerald Griffin Street this Thursday at 5pm, followed by removal at 6.30pm to St Munchin’s Church on Clancy Strand.

The Requiem Mass will take place at 9.30am on Friday, followed by burial at Mount St Oliver Cemetery.

Beloved son of Michael and Jackie, dearest brother of Joanne, Deborah and Rebecca, he is deeply regretted by his parents, sisters, nieces Toviyah and Caoimhe, girlfriend Danielle, grandparents Paddy and Peggy O’Connor, brothers-in-law Kieran and Tobi, aunts, uncles, cousins and a large circle of friends.

On Monday morning, a man in his 40s was arrested in connection with Patrick’s murder, and was questioned at Henry Street garda station under Section 4 of the Criminal Justice Act.

Leading the murder probe, Supt Derek Smart is urging people who may have information to come forward and contact the gardai.

“If at any stage [Saturday] evening, you were here in Thomondgate, and you saw Mr O’Connor inside the pub or outside the pub, or heard anything at all, I’d appeal for you to come forward and let us know.”

Anyone with information is asked to telephone Mayorstone garda station at 061-456980, or the garda confidential line at 1800-666111, or any garda station.