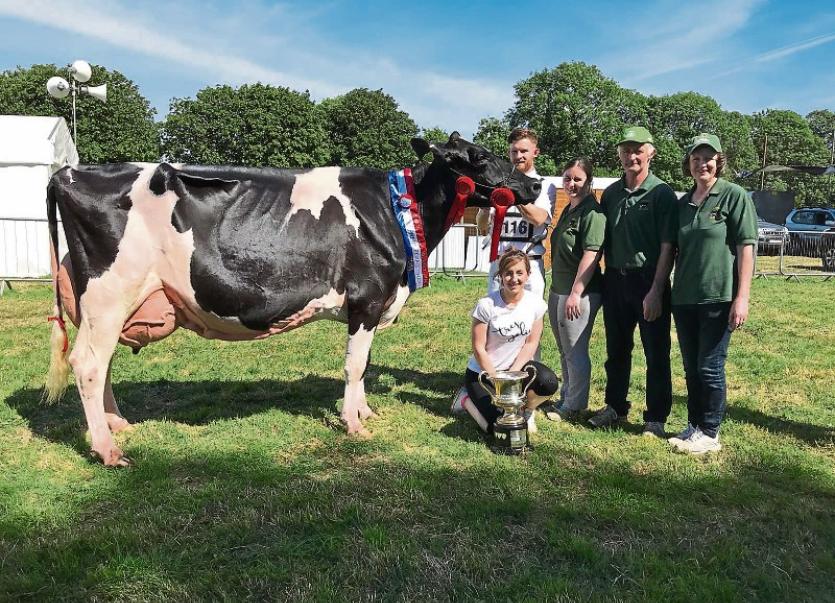 THE NEVILLE family had a big win at the Charleville Show when their cow Milliedale Dusk Rhapsody (EX94) was crowned supreme dairy champion, and also won best udder of the show.

But they nearly missed out on buying her! Donal Neville and his son Thomas flew to England last year for the sale by well known breeders in the UK – Sterndale and Peak Holsteins.

Donal, from Croagh, said they landed in the airport, got in their car and keyed in the destination of a place called Buxton. Little did they know there is more than one Buxton in the area.

“It sent us up to Derby, two hours away, to a farmer’s market where they were only selling vegetables. We turned around but we knew we wouldn’t make the sale in time.

“We rang the auctioneer that was part of the sale and we bought her over the phone after travelling all the way over. When we arrived an hour later we weren’t disappointed with our purchase. It might all be for luck,” smiled Donal.

“The sale was only three quarters of an hour from the airport. We were driving for two hours and we were further away!” he continued. But alls well that ends well and they have a cow in a million on their Croagh farm.

There are 15 generations straight excellence in the line. Milliedale Dusk Rhapsody is calved since January and has had five calves. Her mother is after winning another show this year in the UK after having seven or eight calves.

Donal said they always found it hard to win anything in Charleville.

“Competition is fierce. We’d rate it one of the top three or four shows in the country. The standard of cows is very strong.

“If you think about it geographically, if there is any good cow in Cork, Limerick, Kerry, Tipperary it will be there. It is very accessible for a lot of people. It brings the cream of what is around,” said Donal.

He said all the family are involved in ensuring their cows are looking their best on the day.

“Thomas handled her on the day. He gets them ready and clips them and all that but the five of us are all involved. It is a real family effort,” said Donal.

Another issue was the intense heat but luckily a friend of their kept them a space under an ash tree so Milliedale Dusk Rhapsody didn’t get burnt. She was bought for an investment and it is one that is certainly paying off for the Nevilles.