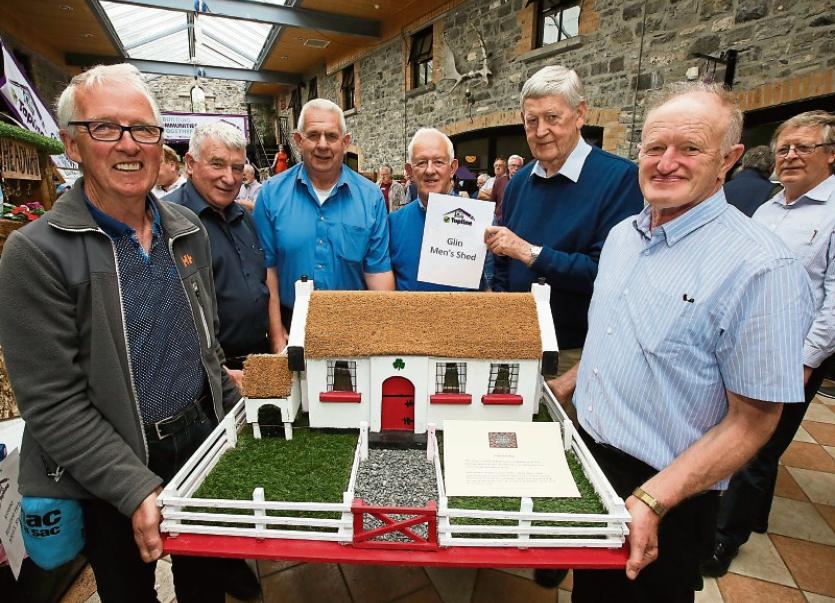 THE Irish thatched cottage provided the inspiration for the members of Glin Men’s Shed when they decided to enter a national crafts competition run jointly by the Irish Men’s Sheds Association and Topline.

And although their creation didn’t bring home the top prize of €2,000, there was great satisfaction in winning a Highly Commended accolade from the judges.

“If we never won anything, the fun and pleasure we got out of doing it was worth it,” Joe Kennedy, chairman of the Glin Men’s Shed said.

There was also the pleasure of meeting Ireland rugby legend Donncha O’Callaghan who headed up the panel of judges. “He was very friendly and is very enthusiastic about the Men’s Shed movement,” Mr Kennedy said.

This year’s competition, the second in The Sheds Series, involved 44 entries from 23 counties, all shortlisted from an initial field of over 100. Glin was the only Men’s Shed from Limerick to take part. Entrants were invited to reflect upon their shed’s place in its community.

For the Glin men, it was the story of the Irish thatched cottage, which is now in sharp decline, which sparked their imagination and creativity.

“It was our first time. It took a lot of work. It was our first effort and we didn’t know what to expect,” Mr Kennedy explained. But they brought home a lot of tips and pointers for next year.

“It was great to meet other people belonging to other Men’s Sheds and find out about their opportunities and problems,” he added.

They now hope to find a prominent position in Glin to showcase the cottage and hopefully in time to mark their first anniversary next month.

“We have come an awful long way in that time,” Mr Kennedy acknowledged. They now have a wonderful premises in St Paul’s Heritage Centre, the former Church of Ireland church and they have 26 loyal members. “We meet three nights a week, Monday, Wednesday and Thursday,” Mr Kennedy said, “but the facility is there for people to meet during the day provided there are at least two members present. And people often come in on a Saturday.”

They started off doing woodwork but there are cards and darts and of course tea at the nightly sessions. “It is a great facility for men, particularly in a rural area,” Mr Kennedy continued. . They have also helped out with stewarding at local events and their next project is to assist members of the Development Association to create a Fairy Park for children as part of the Knight’s Walk.

Earlier this month, the Irish Men’s Sheds Association was honoured with the European Citizens’ Prize, a prestigious award handed out by the European Parliament.