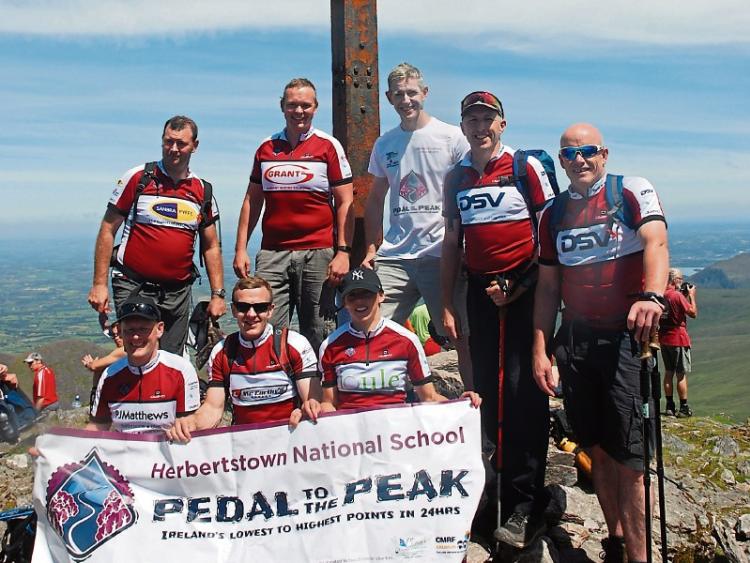 EIGHT hardy souls completed a historic challenge at the weekend by travelling from the lowest point in Ireland to the highest in less than 24 hours.

As far as the organisers of Herbertstown NS’s Pedal to the Peak challenge are aware it had never been attempted before. Donations for completing the mammoth task will go towards a new play area in tandem with a school extension, Cliona’s Foundation and Crumlin Children’s Hospital.

On Friday night at 9.13pm one teacher and seven parents left  North Slob in Co Wexford, which is three metres below sea level. Mike Fitzgerald, teacher, said they cycled through the night with four stops on their way to Carrauntoohil in Kerry.

“We wanted to make sure we had enough daylight on the mountain. We had support vans, motorbike and a jeep with a paramedic so we were very safe. When the road is quiet it makes it even safer.

“We made great time during the night. It was a tough old slog – 257kms. You could be feeling good at one part and bad at another but we managed to get through it fine.

“When we got to Killarney we started meeting people from Herbertstown. They were waving and beeping horns and that got us to the finish,” said Mike.

They arrived at Carrauntoohil at around 9.30am on Saturday morning. There was no chance for a nap. They had a quick break, got changed and began hiking with over 40 parents, staff and friends of the school.

“You are tired but after meeting everyone and having the cycle behind you, you are buzzing. Having people there to meet us gave us a great boost. We got to the summit just before 2pm,” said Mike. In total, it took them 16 hours and 40 minutes to go from the lowest to the highest points in Ireland.

“Locals were there before us so when we got there Herbertstown had taken over the summit!” said Mike.

But they still had to come back down. They were on terra firma before 5pm. Even then, they weren’t longing for their beds.

“We were just very relieved and happy to have it done. There was such a great atmosphere because there was so many from the locality.  A lot of them stayed in Killarney so it was a real community event,” said the teacher from Hospital.

They finally got to shut their eyes around 10pm. Mike thanked each and everyone who was involved in Pedal to the Peak.

“It was a massive success because the whole community got behind it. It is still open to donate and it could be the difference between something small and something really big. It will really help our charity partners as well. It will make a difference to people’s lives,” said Mike.