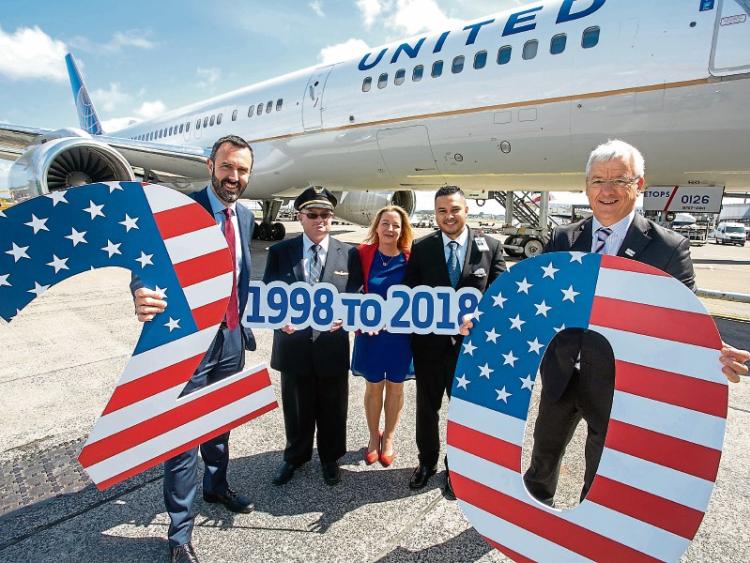 ONE of the top executives in United on this side of the Atlantic has said the airline is committed to Shannon and has “a fantastic relationship” with the airport and tourism bodies after 20 years of flights to the region.

Bob Schumacher, United managing director for sales in the UK and Ireland, told the Limerick Leader that you “don’t do 20 years to go and turn away”, despite the “very reluctant” decision made last year to axe United’s Shannon to Chicago route.

The airline also made the decision last July to slim its Newark route to a seasonal one, operating from March to October, but Mr Schumacher reiterated United’s commitment to Shannon, which last week marked the “very important milestone” of 20 years of flight to New York-Newark, a service that has carried close to two million passengers.

Since the Shannon-Newark flight was launched in June 1998, it has carried over 1.9 million customers on more than 13,500 flights.

Mr Schumacher said: “Of course the macro-economics change around us and we always have to assess what the markets are on both sides of the route - both ends, the US and here, at the moment, set fair.

“Of course, we always have to look at what the competition is offering, that dynamic has changed quite significantly over recent years and has obviously had us go and adjust our offering because of that. But there seems nothing that would obviously get in the way of us celebrating this in 20 years time - even if it won’t be me,” he laughed.

Marking the special occasion, United flight UA25 was welcomed on Thursday of last week to Shannon with a water cannon salute whilst customers, guests, United employees and crew joined Mr Schumacher for a gateside celebration, which included entertainment from Limerick’s own Liam O’Brien.

The United boss added: “It is a fantastic relationship with the airport, with our travel agency partners out in this region, and the Chambers who of course are here attracting FDI and of course local business, so it works for all of us and it is a very successful formula. And we have been doing it for 20 years.”

“Not only does it mark 20 years of flying, it marks 20 years of supporting tourism and industry in this region,” he said.
“Newark is such an accessible airport and New York is, of course, the most popular city in terms of transatlantic services between Ireland and the US.

"We appreciate United Airlines’ commitment in serving Shannon for the last 20 years and look forward to celebrating the next milestone,” he said.