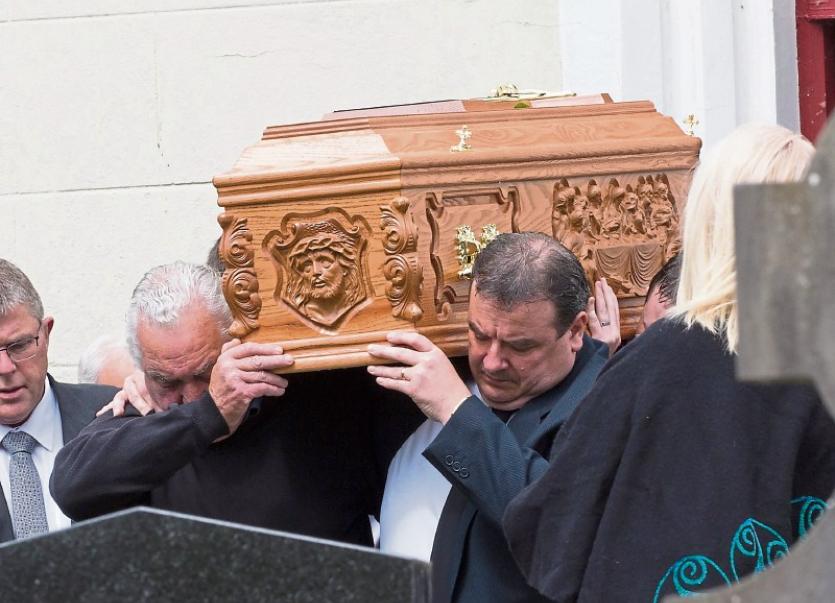 The family of Joe Quinn, Meelick, carrying his remains from the church PICTURE: Press 22

AN ELDERLY man who died after falling into the fire he was lighting has been laid to rest this Wednesday.

Meelick native Joe Quinn, who was soon to turn 90 years old, was lighting a fire at his home in Knockroe last Friday evening when he is believed to have fallen into the fire. He suffered severe burns.

His son Seamus, in his 40s, rushed to his aid and also suffered serious burns. He is still in hospital with burns to his hands.

The father and son were airlifted to Cork University Hospital, where Joe died early on Saturday morning.

The much-loved musician was laid to rest this Wednesday following Mass in Meelick Church.

He is missed by his loving wife Alice, children Caroline, Seamus, Sinead and Joseph, son-in-law Cormac, and daughter-in-law Aoife.

He will also be missed by his grandchildren Dale, Keith, Lauren, Katie, Callum and Robert, as well as his sisters, brother-in-law Ollie, extended family and a large circle of friends.

The father is predeceased by his son David.

Mr Quinn was a well-known accordion player in the local area.

“Joe Quinn used to have a band and they used to play at all the music pubs in South East Clare and Limerick. He has always been very popular. He played at parish socials and local weddings for forty years. It’s a tragic accident,” said a source.

“I grew up only 300 yards from the Quinn family, I’d know them very well. I was meeting with Joe just three weeks ago on a council issue. They’re a lovely family, extremely well-liked,” he said.