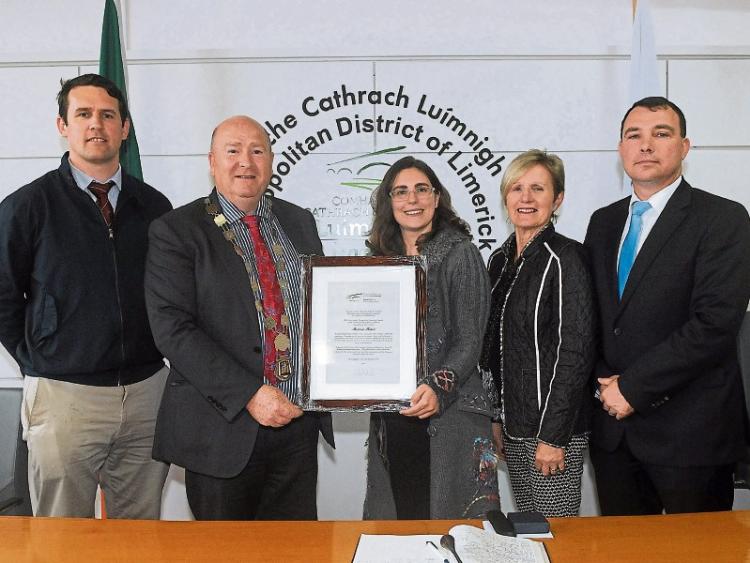 Sharon, who is the Limerick Leader’s resident historian, was joined by her family and friends at City Hall on Wednesday last as she was afforded a special mayoral reception.

The prolific historian has written a number of books focusing on Limerick’s past, and has also maintained the popular Limerick’s Life website, which she noted has seen 600 articles published to it since its inception earlier this century.

Cllr Lynch said Sharon, a former person of the month winner, “has worked tirelessly both now and over the years in local history research on Limerick”.

He said her web site represents “a treasure trove of Limerick history from rare images to untold stories of Limerick people.”

She recently joined the Limerick Leader team, where she puts together the Limerick Chronicle each week, a newspaper which is still the oldest title in the Republic of Ireland, and marks its 250th anniversary this year.

Among the many books Sharon – who lives in Corbally – has penned include The Little Book of Limerick in 2013, Limerick’s Merchants Traders and Shakers in 2015, and a Stitch in Time – a history of Limerick’s clothing factory last year.

She also teamed up with the Limerick Chamber for its 200th anniversary book in 2015. All this, and she is not even a Limerick native!

But speaking at the reception, she said: “I have Limerick in my heart and it has been home to me for 21 years.

If I were in a family, it would be time to get the key to the house. So am I a local? If a local has a passion for the city, if a local wants to see the city improve into the future, if a local has put their blood, sweat and tears into the story of the city, then yes, I am a local.”

Among the people present at her reception were Limerick council historian Dr Matthew Potter and Liam Irwin of Mary Immaculate College, as well as her sons Stephen and Peter, and her wife Susan.

“The honour that the mayor has given me tonight is not just for me, it is for all of you and for all the people who have encouraged me to continue, for all of those who gave their time for interviews, and all of those who have gone before me who have created the information mountain on which I stand,” she said.

Cllr Lynch awarded Sharon a piece of Limerick lace, and said the reception was in honour of her “tireless efforts to present, promote and preserve Limerick’s history.”