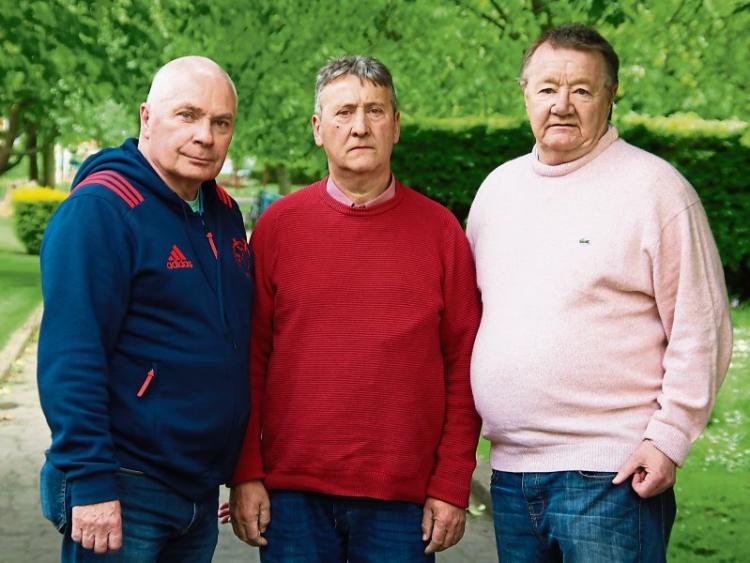 Fifty years ago, 19 young boys at a Limerick city school were sexually abused by their teacher. Almost nine years after their abuser was convicted, the Creagh Lane survivors are still fighting to be compensated by the State.

The former students did not expect the State to become the biggest obstacle facing them when they first came forward with allegations of sexual abuse against their former teacher. But now, 14 years later, that’s how they see it.

Ex-Christian Brother Sean Drummond was jailed in 2009 for indecently assaulting 19 boys, between the ages of seven and nine, at the primary school on Bridge Street between 1967 and 1968.

Applause rang out in the courtroom as he was led away, applause so loud the Judge gently reminded those clapping they were in danger of being held in contempt of court. It was a small victory in a fight they did not think they would win, according to John Boland, Christy Rainbow and Thomas (Tom) Hogan, who are among the students he abused.

“The Judge told us that we are now survivors,” John tells the Leader.  Nine years later, John, Christy and Tom are still fighting for the group of 19 men - 17 now as two have since passed away - to be compensated by the State.

“They have put us through the mill,” Tom said.  “It’s abuse all over again.”

Hailing from St Mary’s, John, Christy and Tom are proud of where they are from. “We came from a working class area,” John explains. “You fought your battles outside on the green and you left them there.”

“You shook hands afterwards and that was it,” Tom adds. “Our parents brought us up to respect the clergy.”

“It was our first time arriving in the school, our first year,” John explains.  “Just after coming from the Convent and on the first day we met this Brother Drummond. At the time he looked to us like he was 40 years of age, a tall man with the collar, the whole lot. But it turned out he was only 18, 19 years of age at the time. Within two days of that schooling, each and everyone of us (the 19 students) were being abused.

“Within a week, he had  most of the class abused and that was our introduction to schooling.”

Between July 1967 and July 31 1968, Drummond indecently assaulted more than one third of the pupils in the class of 54 students.

“He had a tall slim countertop and a stool in underneath it with a little bench,” Christy explains.

“He would tell you to put your heads down and it was a lucky dip. That’s the way he was. He would take you from the classroom, from your seat and take you up behind so that nobody could see what he was doing. He would put his hands into your pants or, another favourite, he would bend you over where you could feel that he had an erection.”

Although abuse was being carried out extensively throughout the class, each student believed they were the only one targeted by their teacher.

“It played in their heads but each and everyone of them locked it out of their heads at the same time,” John said.

The students carried on after that year. Some went on to leave the area, some moved away.

But some stayed friends for years; Best men who stood shoulder to shoulder with each other at their weddings, friends who celebrated the births of each other’s children and went through all of life’s ups and downs together, John explained.

“But we had never mentioned it to each other.”

“It was another part of our life that we blanked out, we passed by,” Christy said.

The abuse inflicted on them affected them each in different ways. Some struggled with addiction, some developed problems with alcohol. Some of the men say the abuse profoundly affected their education and caused emotional difficulties. Some attempted to take their own lives.

A formal complaint was made to gardaí in 2004, by a member of the group who feared Drummond may still be offending. “They were fortunate and lucky to find the records of that classroom and they knocked on every door of the boys in that classroom,” Christy explained.

Some of the class didn’t want to speak about their experiences, he adds.

“Some went to the guards and told lies to their families, said they witnessed an accident, just to go to the station and when they got there then, they froze.”

“Because every one of us was involved with clubs, with sports, past and present and would know a lot of people. To come out and say I was abused as a child - you are frightened and ashamed.

“You think ‘I must have done something wrong’ but how can a child do something wrong at eight years of age? Think of this - believing in Santy. We were children who believed in Santy.”

The hardest part of the process was telling their loved ones, the men agree.

“I am lucky that my parents died before I could tell them,” Christy said.

“I only told my wife and family a few years ago, I had to build up the moral courage. It was the hardest thing in my life to tell them, and to hide it from them.

“To hide it from my wife, the mother of my children. I don’t want to talk about what happened us because it upsets me. It completely upsets me because I will break down,” he says.

Ex-Brother Drummond was  sentenced to two years in prison. He was given a further two year suspended sentence in 2013, for indecently assaulting another pupil between 1968 and 1969 at Sexton Street primary school, where he was transferred after his year at Creagh Lane. He left the Christian Brothers in 1970.

Painful as it was coming forward, telling their families what happened them, and facing their abuser in court, the years that have followed have been just as hard, if not worse, the men believe.

“I think when the court case was over we thought we had closure but Jesus like,” Tom said, quietly. “It’s turned full circle.”

An ex-gratia scheme was set up for victims of sexual abuse in schools following a 20-year legal battle by Cork woman Louise O’Keeffe, who won her case against the State in the European Court of Human Rights (ECHR) in 2014.

“In her case, it was decided that the Irish Government had failed in its duties to protect Irish children in school,” John explains, adding that the ECHR ruled that the State was liable to pay victims compensation.

However, Creagh Lane students find themselves excluded from this ex-gratia scheme, due to what legal experts believe is a misinterpretation of the O’Keeffe ruling.

“In order to qualify for the scheme, number one you have to had dropped your case against the State,” John explains.

“You have not got to be statute barred and you have to have a prior complaint.”

And it is with the prior complaint, that the former students find their problem. “A prior complaint means that your abuser has to have abused,” John said.

“He has to have had a previous record and the Government has to have known about it and not acted on it. We can not have that because we just arrived in the school on literally the same day (our abuser) did. It was his first teaching post.

“When our abuser was charged in court, he said he had never abused before. The actual court script proves that we can’t have a prior complaint. So by the criteria of the scheme alone, we can’t qualify.”

Christy gives an example: “Take Child A and Child B. Child A is abused. Nothing happens. Child B gets abused, then we can act. Forget about Child A, we’re giving the perpetrator the first bite of learning his experience. They give grace to sexual abusers.”

John, Christy and Tom all firmly believe the Carrigan report, which informed the Government of evidence of child abuse in schools almost 90 years ago, in itself is a prior complaint.

The Department of Education gave the congregation a dispensation, John explains.

The group is frustrated; tired of being told they have a “very unique” case. They have lobbied countless deputies, MEPS and councillors, staged numerous protests. In December they took their case to Brussels to highlight their treatment in the European Parliament.

“We have representatives in this city and there are only two so far (Willie O’Dea and Maurice Quinlivan) who have stood up for us,” Christy said.

“I don’t know where we can go from here,” John said. A localised campaign targeting general election candidates is the group’s next step, he adds.

“Our next step has to be protesting Government. Two or three years ago, I would have settled this for pennies. I would have walked away out the door. The manner in which they are behaving, I don’t want money at all. I want an apology. This is principle. I want them to stand up not only in court but in the Dáil and say they are sorry, that they were wrong.”

“We’re a band of brothers.”

“I went to school with these lads and they will stand with you through thick and thin,” Christy added.