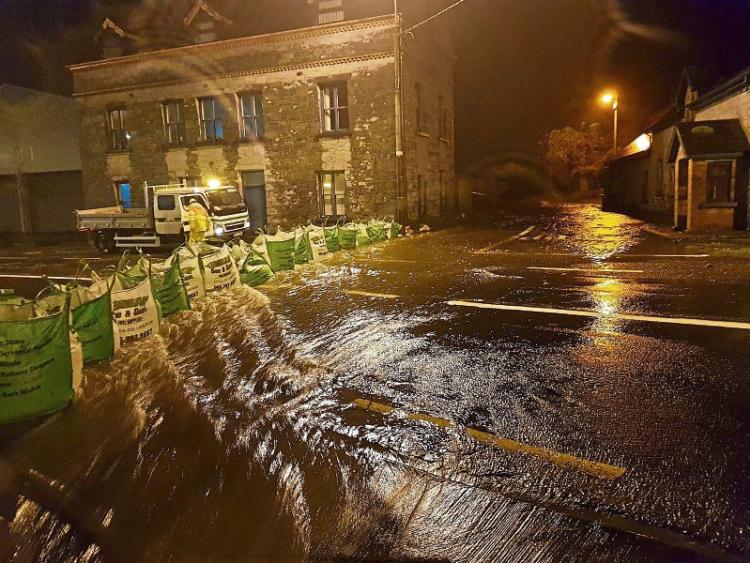 THE man-made lake above Foynes which casued flooding of the flying boat museum last year is to be retained to provide a vital independent supply of water in the event of fire at the port.

But the Shannon Foynes Port Company, which owns the lake, has agreed to monitor water levels as part of a number of measures aimed at preventing a recurrence of last November’s flash flood. On that occasion the lake overflowed, overspilled the culvert and sent sheets of water down Marine Cove Road flooding the museum.

In March, a  report on the flood was presented to Adare Rathkeale councillors earlier who asked that decommissioning the lake be discussed with the port company.

But following that meeting with the port company, councillors have now been told that  discontinuing its use as a fire-fighting reservoir is “most definitively not an option for the forseeable future”.

“This independent firefighting water supply is a key component of the port’s emergency supply chain and facilitates the ongoing growth of the port,” a written report of the meeting states.

“Foynes port currently imports in the region of 450,000 tons of petroleum every year to the SEVESO approved AFSC terminal. Any risk to the firefighting water supply and system of the port puts that business at risk. The Irish Water local water supply is not sufficient to supply the firefighting water demand needs to a port of the scale of Foynes.”

Councillors had also insisted a monitoring system be installed to warn if water levels were rising. This is to be installed “presently”, councillors were told last week and the council will have access to the remote monitor. “The system will monitor level fluctuations initially and then alarm levels will be determined and activated,” the report stated. The port company also gave an undertaking to build a wall to the rear of its offices, which would divert any flood water from the hill away from the village and towards the river.

In a separate move, the council is examining the option of restoring or replacing the culvert along Marine Cove Road and has begun discussions on the matter with the OPW and Transport Infrastructure Ireland.

Cllr Adam Teskey pointed out that it was vital that the area between the lake and culvert be monitored and kept clear.

“There should be an ABC check-list,” he said while Cllr Kevin Sheahan pointed out that diverting any flash flood water to the river would not work if the tide was full in.

“When the tide is in, the flap door (sluice gate) is closed,” he said. “If you take away the flap-door, you could have tidal flooding.”

“If there were to be another flash flood, are businesses indemnified?” Mayor Stephen Keary asked and he argued that those who had prepared the report should discuss the issues with the museum.

“They shouldn’t hear this first from the media,” he said.

Director of services  Caroline Curley, said the November flood was from an unprecedented source and the safety measures put in place would give adequate protection.