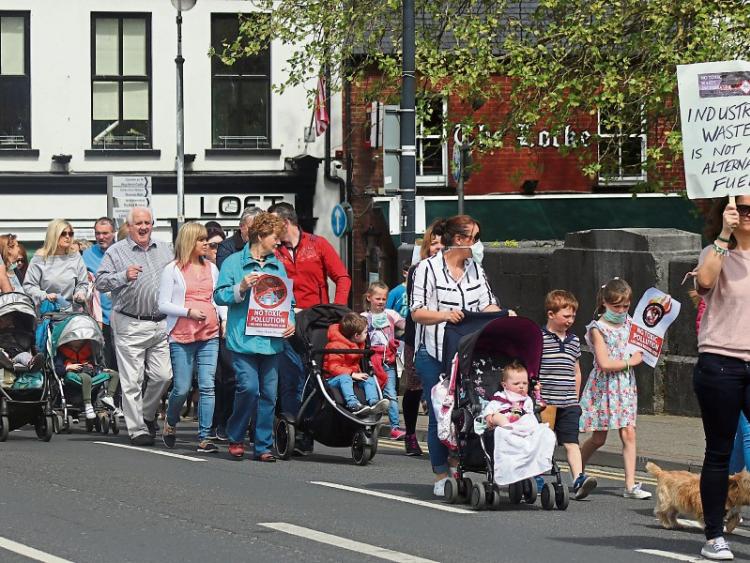 The march against Irish Cement’s plans for Mungret gets under way in the city Picture: Brendan Gleeson

A CAMPAIGN group have vowed to continue the fight against Irish Cement’s controversial blueprint for its plant in Limerick.

It comes after the environmental ​regulator delayed its decision on whether to afford the firm a licence to go through with its reforms in Limerick’s suburbs.

Hundreds of people marched through the city centre at the weekend in protest at the firm’s proposals to switch away from fossil fuels in favour of used tyres and solid recovered waste in cement production.

Irish Cement has long insisted its plans will not impact the environment, saying as the burning will take place an extreme temperature, the impact will be negligible.

This is disputed by Limerick Against Pollution (LAP), residents, plus many members of the city’s business and political communities.

Speaking at Sunday’s rally, Kate Brouder, a student at Laurel Hill Colaiste, said: “I can’t believe that Irish Cement are going to be allowed to burn all sorts of toxic industrial waste so close to the city centre How can they pretend to us that this is okay? I’m only 13 years old, and even I know burning things like tyres and plastics is not good for my health.”

The Environmental Protection Agency (EPA) has this week confirmed that it will delay its decision on whether to afford Irish Cement an operating licence to September 5, a move welcomed by LAP.

”We have more time to gather more objections and submissions, and that is what today is about, raising the awareness that we still have time to stop this," Claire Keating, LAP, told the rally.

She added​: “Granting Irish Cement a licence to burn their extensive list of industrial waste less than 2 km from the city centre is a serious threat to our City’s reputation and to our well being. Just as Limerick is entering one of the most exciting chapters in its’ history, why would we put all of this in jeopardy?”

Politicians from across the spectrum were at Sunday’s march, including Deputies Willie O’Dea, Jan O’Sullivan and Maurice Quinlivan, plus Senators Kieran O’Donnell and Maria Byrne.

Many metropolitan councillors also turned out, including Fine Gael councillor Daniel Butler, who welcomed the delay from the EPA.

He said he believes there will be additional delays, adding: “I wouldn’t be surprised if it was extended vy another month. It’s reflective of the level of concern there is in terms of the plan.”

Meanwhile, Brian Gilmore, Irish Cement communications director, has responded to a flyer put out by LAP in advance of Sunday’s march, claiming that it carried “a number of inaccurate” statements.

He said: “While Irish Cement recognises that people may have concerns about the current fossil fuel replacement plans in the Mungret cement factory, and individuals have the right to express their opinion, we believe having access to factual information will allow for more informed discussion and debate.”

Mr Gilmore drew people’s opinion to a comment from An Bord Pleanala in its recent granting of permission to the physical infrastructure surrounding the Irish Cement plant that the project “would not be prejudicial to public health, would be acceptable in terms of traffic safety and convenience and would be in accordance with the proper planning and sustainable development of the area.”