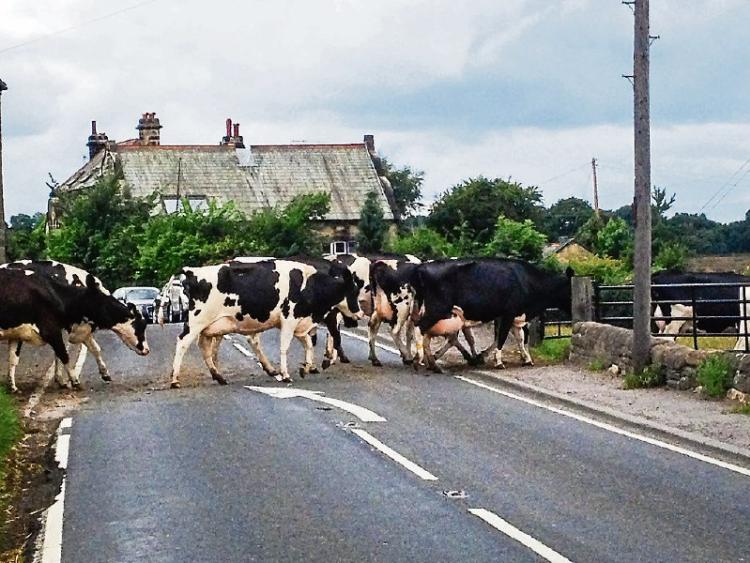 A COUNTY Limerick farmer has been convicted and fined €300 over his Effin cows’ dung.

Patrick Fitzgibbon, aged 46, of Maiden Hall, Kilmallock pleaded not guilty to the offence of permitting dung/urine to be left on the Effin road.

The case was heard in the local court in January. It was adjourned for gardai and the defending solicitor, Brendan Gill, to make written submissions to Judge Marian O’Leary.

At the original hearing  Garda Grace O’Sullivan said at 11.50am on November 3, 2016, she received a call that there was a traffic accident on the Effin Road.

“I saw a man standing beside a motorbike. There was damage to the right side of the bike. He said his name was Donal Sheedy and he was travelling from Effin to Charleville. He said he was familiar with the road and that there was an animal crossing on a section of the roadway.

“He said he had been driving slower due to the rain and slowed again in anticipation of the crossing. He said when the front tyre went over the crossing, the motorbike went from underneath him. He said he was sore but didn’t require an ambulance,” said Garda O’Sullivan, who then checked the roadway.

“It was very slippy on that section. I took photographs,” said Garda O’Sullivan, who contacted Mr Fitzgibbon.

“He said he was unaware the roadway was dirty and was surprised somebody had an accident. I asked him to make a statement and he declined to do so,” said Garda O’Sullivan.

Mr Gill asked what evidence she had that the waste was from his client’s animals?

“He said the animal crossing belonged to him,” said Garda O’Sullivan.

Mr Gill said: “You can’t say with any certainty the alleged material caused the accident.”

“It was extremely slippy, even for me to walk it,” replied Garda O’Sullivan.

Mr Sheedy, the motorbike rider, said he suffered two fractured ribs and ligament damage to his shoulder after he sought medical attention.

Mr Gill said there was no medical report in court and put it to Mr Sheedy he is “trying to copperfasten a personal injury charge”.

“No,” said Mr Sheehy, “Days after the accident the farmer made no effort to clean the road. I am a motorcycle trainer - road safety is what I do.”

“I am doing my best for road safety,” said Mr Sheedy.

Mr Gill argued the case be struck out on four grounds. He said the address of Garrienderk South, Charleville, Co Cork on the summons is the wrong county.

Mr Gill said that in the garda’s evidence, she used the word “earth” instead of “dung”. The solicitor said the State hadn’t proven that the dung came from animals owned by Mr Fitzgibbon.

Lastly, Mr Gill argued the offence was one “more properly taken by the local authority”.

The State rejected the four points.

The case was adjourned for the prosecution and defence to provide written submissions.

At Kilmallock Court, Judge O’Leary said she had read all the submissions.  Judge O’Leary said the State are entitled to amend the address. Regarding proving the dung came from Mr Fitzgibbon’s animals, the judge said he didn’t deny he owned the animals.

Mr Gillssaid the summons - permitting dung/urine to be left on the road - is very specific and the word dung was not used. Judge O’Leary said the animals created the hazard which caused the accident.

“The defendant has a case to answer,” said Judge O’Leary.

"He has a busy farm and busy family life. He has never been in any difficulties with gardai or the local authority. He endeavours to follow best farm practices," said Mr Gill.

The solicitor said his client has reported the matter to his insurance company and that is "taking its own course".

Appeal papers and recognisance were lodged in court.