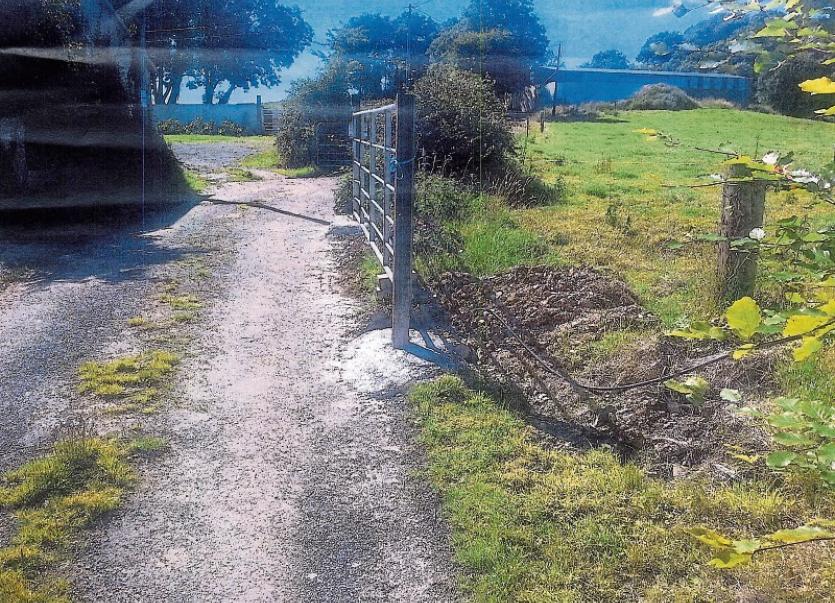 A FARMER who “deliberately and consciously” erected a ten foot gate on the margin of a country boreen was fined €500 after he was convicted of an offence under the under Roads Act.

Robert Hickey, who lives near Ballyneety, was prosecuted by Limerick City and County Council in relation to an offence dating back to May 31, 2016.

During a district court appeal, Judge Tom O’Donnell was told there is “a history” between Mr Hickey and another farmer – Richard Tierney –  who owns 40 acres on the opposite side of the boreen.

Limerick Circuit Court was told the road – an 85 metre cul-de-sac – is technically a public road for which the local authority is responsible.

Senior Executive Engineer Finbarr Keyes confirmed the road was taken in charge in 1978 and therefore is covered by the Roads Act.

He told solicitor Ger Reidy that he received a complaint from Mr Tierney on May 31, 2016 that a gate at the entrance to Mr Hickey’s lands had been “moved out” and was causing a hindrance.

When he carried out an inspection he observed a gate which had been “erected right on the edge of the road”.

He said  there was evidence of fresh concrete and that he was satisfied it was “new construction”.

Referring to the Roads Act 1993, Mr Keyes said the council takes the view that it is responsible for the “surface and margin” of all public roads “in as far as the roadside ditch”.

He said any signage on public roads must be at least 600mm back (from the road surface) for safety reasons and to allow machinery and traffic to pass up and down.

In his evidence, Mr Tierney said he bought 40 acres at auction in September 2013 and that he made enquiries before completing the deal as to the status of the road.

He said there were no  issues prior to the gate being moved but that since May 2016, cattle, knackery and feed lorries have not been able to access his farmlands.

“We could take 16 cattle in the truck before. Now it’s eight,” he said explaining that bigger trucks cannot turn-in given the location of the gate.

“The gate pillars are an obstruction. We haven’t been able to get the bigger vehicles in,” he said adding that tenants who live in a house at the farm have also had difficulties getting in and out.

Being cross-examined by John O’Sullivan BL, Mr Tierney accepted there are “difficulties” between him and Mr Hickey.

He also agreed there are separate civil proceedings underway in relation to “a boundary issue”.

Mr Hickey told the court  he did not move the gate out and he insisted he did not believe it is causing an obstruction.

However, having viewed photographs of the gate, Judge O’Donnell said he did not accept the assertion that it had not been moved. “It is abundantly clear it has been moved into the margin of the roadway,” he said.

He imposed a fine of €500 and directed that the costs of Limerick City and Council be paid by the defendant.