‘You did this to me’: Man who shot himself on Limerick hospital grounds wanted to make point to HSE 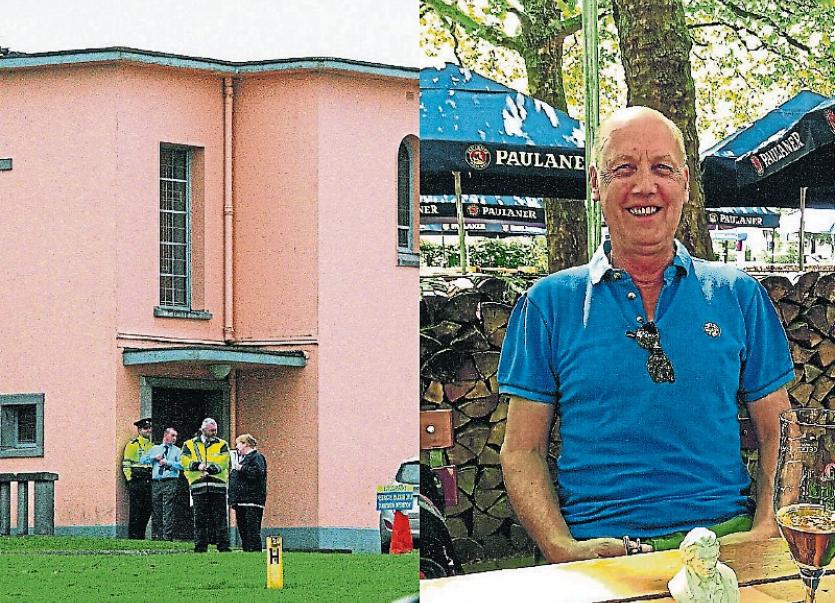 Jack Liston, right, who died aged 67 after a self-inflicted gunshot wound to the chest on January 18, 2017 at the chapel in UHL

A PENSIONER dying of cancer who took his own life on the grounds of University Hospital Limerick “sacrificed his life with the hope of helping someone else”, an inquest heard.

Jack Liston, 67, of Castleconnell, died following a self-inflicted gunshot wound to the chest in the hospital chapel on January 18, 2017.

Speaking at his inquest this Wednesday afternoon, Jack’s partner Mary Manton told the coroner’s court that “he wanted to make a point to the HSE: ‘You did this to me’”.

Speaking to the Limerick Leader after the inquest, Ms Manton said that Jack hoped to attend his only daughter Jane’s wedding in September last.

Ms Manton, of Cratloe, detailed how Jack’s condition “had deteriorated rapidly” while he and his family waited for an MRI scan at UHL, which was required for urgent surgery.

The inquest heard that tumours were found in Jack’s colon following a biopsy, after a colonoscopy was carried out. This was after a colon screening kit was sent to his house in September 2016.

Jack “knew it was malignant” when he was informed that the tumour was going into the liver, according to CT scans in early November.

His family’s solicitor, Turlough Herbert told the inquest that Jack’s condition was identified as a “significant risk” in November.

A surgeon in the Mater Public Hospital in Dublin told him in late November that he could operate on Jack but an MRI in Limerick was required.

However, after an MRI scan was carried out on January 10 in Dublin, a surgeon told him that “an operation wasn’t an option any longer, the cancer had spread into his liver and stomach”.

Ms Manton said the need to get an MRI in Limerick “delayed things further” and that she and the family rang UHL every day to confirm a date for an MRI, which was then set at January 17.

However, Ms Manton told the inquest, the surgeon in Dublin “expressed concern” over the date and “wanted to bring it forward”.

The consultant surgeon at UHL admitted John in order “to hurry things up, but there were 62 people on trolleys that day”.

She told the inquest that, as far as she was aware, there was only one MRI scanner in the hospital and didn’t operate after 4.30pm. Mr Herbert claimed that it did not work on weekends.

On January 9, Jack was driven to the hospital in Dublin “under false pretences” that he had chest pains in order to avail of the MRI. He received the MRI the next day.

“He was dying from the pain. He was literally at the end of his tether,” Ms Manton said.

When he was informed that surgery was not an option, he was advised “the only option for him was chemo”, she said.

The following Sunday, on January 15, Jack underwent a stoma procedure and was discharged on Tuesday morning.

Mr Liston was due to attend an appointment to change his colostomy bag the next day at 2pm.

At 4pm, when she went to cook dinner at Jack’s home, the gardai had arrived and informed her that he had died.

Gda Timothy Walsh stated that gardai were called to a report of a sudden death at the chapel in UHL at 2.35pm. He said that he observed a “small handgun” at the scene.

Medical evidence by state pathologist Dr Michael Curtis showed that Mr Liston died as a result of a contact bullet wound to the left side of the chest, which transfixed the heart.

Ms Manton said in her deposition: “He was in so much pain and had so many knock-backs in the weeks leading up to his death.”

“He decided he was going to do it on the grounds. I believe he went to the chapel because it was a nice, quiet place and he wouldn’t disturb any patients,” she told the inquest.

Coroner John McNamara said he was “struck” by Ms Manton’s evidence and said he “could sense the frustration felt by the family with the health system”.

Mr McNamara, who returned “an appropriate verdict” of suicide, said he will write to UHL to recommend that MRI scans be prioritised for patients involved in screen programmes who have “worrying” test results.

The UL Hospitals Group stated: “On receipt of the Coroner’s findings, consideration will be given to any recommendations.”