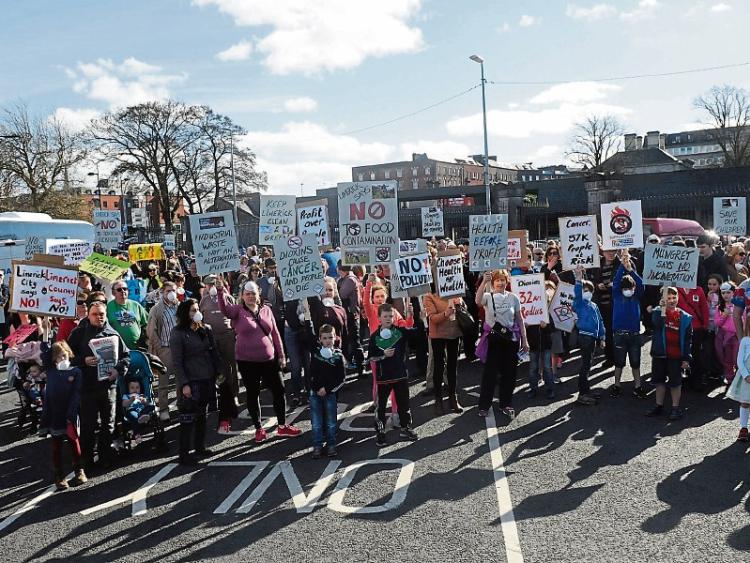 1,000 people were at the first demonstration in protest at Irish Cement's plans back in March 2017 PICTURE: GARETH WILLIAMS

A BIG march is to take place in Limerick city in opposition to Irish Cement’s €10m plans for Mungret.

Anti-incineration group Limerick Against Pollution (LAP) are organising the event, which will kick off from City Hall at Merchant’s Quay at 1pm next Sunday, May 13.

It comes in the wake of An Bord Pleanala giving the green light to the firm to build the physical infrastructure to construct the buildings required to store the solid recovered waste and tyres which it plans to make cement with.

Now, with the Environmental Protection Agency (EPA) set to decide on whether Irish Cement is afforded a licence to do this, LAP has organised a “family friendly” march in the city.

Dr Angus Mitchell, LAP, said: “We are being told the EPA will make its decision on May 16, so we’re trying to get it in before this.”

“We feel there is no democratic process at local level any more. Most of the councillors have been on our side in terms of objecting to these plans. In the end, one of the immense frustrations of all of this is we have not been given a democratic voice,” the O’Connell Avenue man said.

“There is a lot at stake in this. Because of the force of democratic process and the inability of the councillors to reflect how the people feel, and the disregard for an alternative view, one of the only ways we can show our utter sense of outrage and frustration is to have a protest march through the centre of Limerick City,” he said.

Dr Mitchell believes up to 1,000 people could take part in the march next Sunday, which will finish at the People’s Park.

While residents are concerned at the impact the changes will have on the environment, Irish Cement has always maintained due to the fact burning of tyres and solid recovered waste will take place at such high temperatures, the impact on the environment will be negligible.

It’s the second time LAP has marched in protest at these plans, with around 1,000 people turning out to a similar event in March 2017.