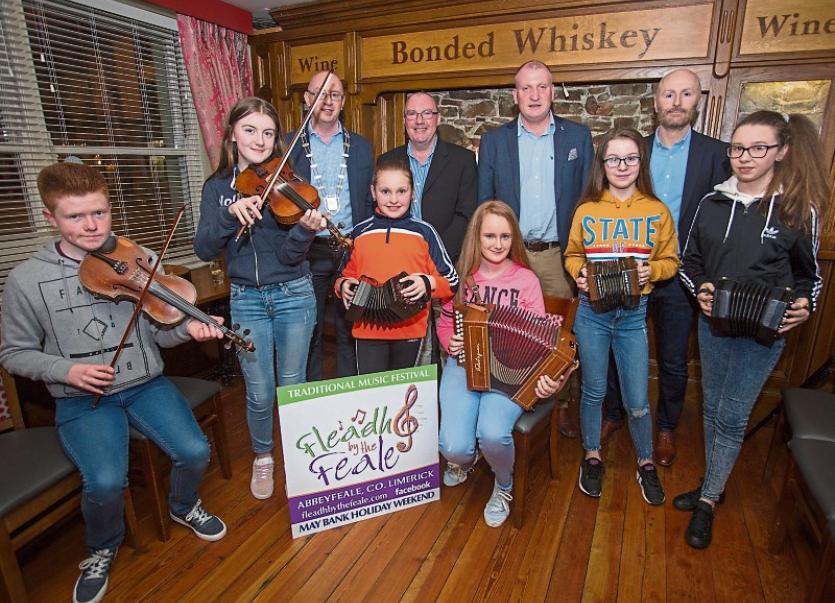 LIMERICK’S premier traditional music festival, Fleadh by the Feale, kicks off this Thursday in Abbeyfeale and will run over five days until well into Bank Holiday Monday.

The organisers have a wealth of events, sessions, workshops and free street entertainment lined up for the thousands of people expected to descend on the West Limerick town with its deep-rooted music tradition.

All they are hoping for now, according to Vincent Sheehy, the new chairman of the committee, is fine weather. But they have contingency plans made to take outdoor events inside should the sun not shine.

One of their aims this year, Mr Sheehy continued, is to provide even more on-the-street entertainment and things to do. “We have a good line-up. We are hoping to make it a full, five-day festival with something for all age groups,” Mr Sheehy explained.

In addition to the Busking Competition which takes place all along Main St and the Square on Friday night, the Gig Rig in the Square will host the Athea Wrenboys and Templeglantine Comhaltas on different evenings as well as the Templeglantine Céilí Band for what promises to be a giant outdoor céilí.

But this year, festival traders have been added to the mix, creating their own special excitement.

A Youth Trad Session which was introduced with great success last year is making a comeback as too is the Slides and Polkas session in memory of the late Dan Murphy, a founder member of Fleadh by the Feale.

Adherents of the Sliabh Luachra music tradition will be delighted that a special Sliabh Luachra session has been added to the mix on Saturday. In addition, big numbers have signed up for the masterclass workshops Details of all events can be found on

The highlight of Fleadh by the Feale is always the celebrity concert on Sunday night which this year features The Shandrum Céilí Band, which draws from a long musical tradition in Freemount. Appearing with them will be singer Elle Marie O’Dwyer, Ann Marie O’Riordan and dancers and the Coláiste Ide agus Iosef School Band.

With sessions in all the bars around town, storytelling, a poster competition and a céilí also in the programme, Fleadh by the Feale promises to be a lively weekend, finishing on a high-note with the holding of the All Ireland Bone Playing Championships, junior and senior in the Square on Monday night.

Full details of all events can be found on www.fleadhbythefeale.ie