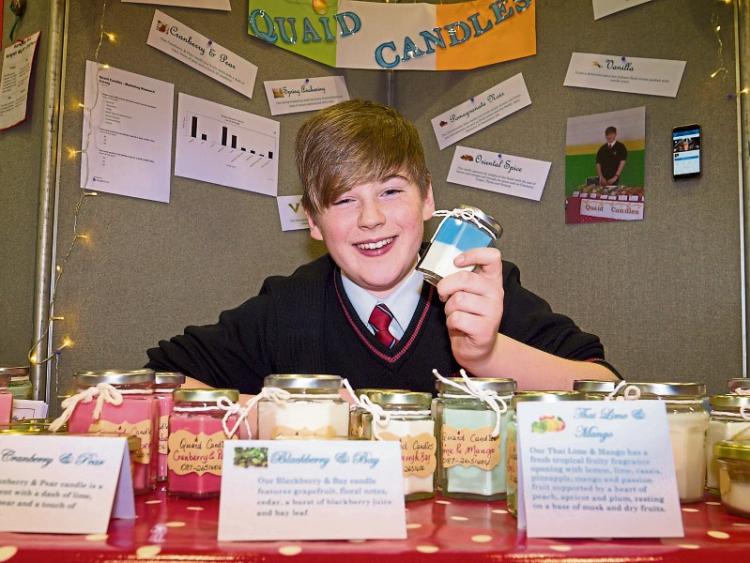 THE Quaid name, revered in Limerick hurling lore, is now up in lights thanks to the enterprise of a new generation.

Evan Quaid is a first-year student at Hazelwood College, Dromcollogher and has established a burgeoning new micro-business making candles.

And this grandson of Jack Quaid, nephew of the legendary Tommy  Quaid, cousin of current LImerick goalkeeper Nicky Quaid and son of John and Tríona Quaid of Castlemahon has called his enterprise, fittingly, Quaid Candles.

Now Evan will represent Limerick in the junior section of the national Student Enterprise Awards which take place in Dublin next week.

And, explains the 13-year-old, it all started with his determination to save for a new phone. Before Christmas last year, he came across a You Tube video on how to make candles and spotted his opportunity. And when the chance came for students to contribute to a Market Place at school, Evan grabbed it.

This, he said was intended for Transition Year students only but first and second years with ideas were asked to contribute. Quaid’s Candles won best junior prize there and was then put forward for the Limerick heat of the Student Enterprise Awards where he again won.

For the national final, Evan had to develop a business plan, explaining his product, his marketing plan and looking at costs and pricing. His business teacher, he says, has been a “massive help”.

In the months since he began his enterprise, Evan has refined his technique, finding out what works best for him through trial and error. And now he  is busy every night filling orders. “They have been selling very well,” he explains. “They have become very popular.”

He offers two candle sizes, large and small but  has a range of ten scents including lemongrass, lavender, pomegranate noir and blackberry and amber. He sources his raw materials online but has stayed local when it comes to selling and his candles can be bought in outlets in Newcastle West, Castlemahon, Feohanagh, Dromcollogher, Listowel  and Abbeyfeale.

“I am looking into branching out into a range of diffusers,” Evan explains and he is looking forward to the final in Dublin which takes place in Croke Park, sacred ground for anyone from a hurling background. “It is not about winning. It is about the experience, meeting the judges and the different people,” he says sagely.