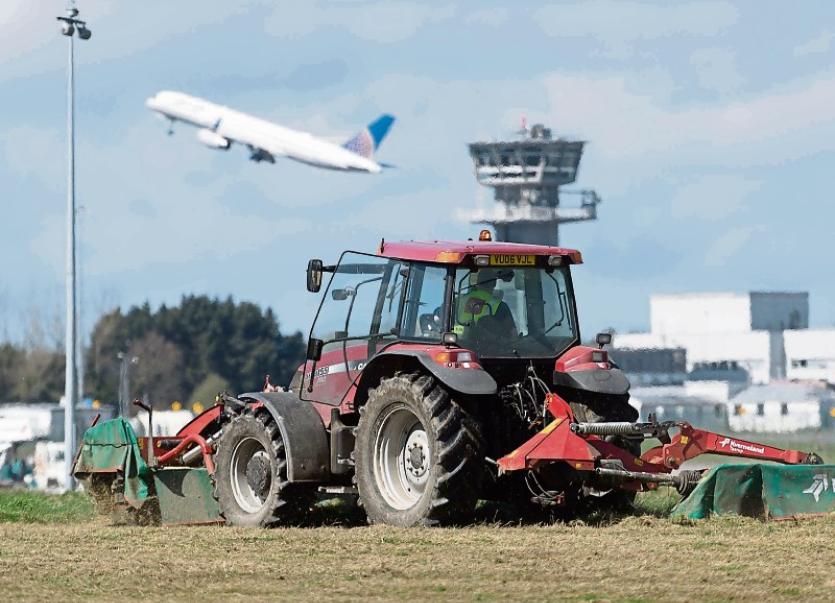 Limerick farmers caught in a fodder crisis were delighted to get fresh grass from Shannon Airport this week to feed their cattle Picture: Eamon Ward

“I DIDN’T actually stop for breakfast yet,” says a remarkably jovial Peter Thompson.

The time is 12.15pm on Tuesday. The farmer milked his cows that morning and let them out to grass. But he had to move quickly to bring them in to the sheds again as the ground was too wet.

“They destroyed the place unfortunately,” said Peter, from Cappamore.

He received 20 of the 1,200 bales cut at Shannon Airport over the weekend to help farmers battling the fodder crisis.

“It was brilliant to get them,” said Peter, who generously shared them with two other local farmers in “desperate need”.

The two fine, sunny days on Friday and Saturday appear to be a false dawn as the wet weather is back, and there is a mixed forecast for the weekend.

Peter started buying bales since the end of January as he could see a fodder shortage coming.

“I didn’t think it was going to be this bad,” he said.

Nobody did. It is one of, if not, the longest winters in living memory.

Peter did get cows outdoors on Sunday and Monday but they are indoors again.

“Land is very heavy. You live in hope they will be out in a couple of days time. It is desperate. The financial cost is huge,” said Peter.

Contractors rolled onto the 400 acre Shannon Airport site shortly after 10am on Friday to begin three days of harvesting.

The first loads began to depart the airport on lorries from midday to a number of regional locations for distribution, with some local farmers arriving to collect bales for their own and neighbours’ animals.

IFA president Joe Healy said that the combined effort of the airport, IFA and farmers was a reassuring statement that, at the worst of times, the spirit of the ‘Meitheal’ still triumphs in rural Ireland.

Shannon Airport’s director of operations Niall Maloney said that having opened up the airfield to the local farming community during the 2013 fodder crisis, the airport regretted that farmers were faced with another challenge of this magnitude so soon.

But, he stressed, they hadn’t to think twice about responding.

“We were approached by the local farming community to say there is a crisis, which we're all aware of, and could we help. There’s only one answer you can give and that is ‘absolutely yes’,” said Mr Maloney.