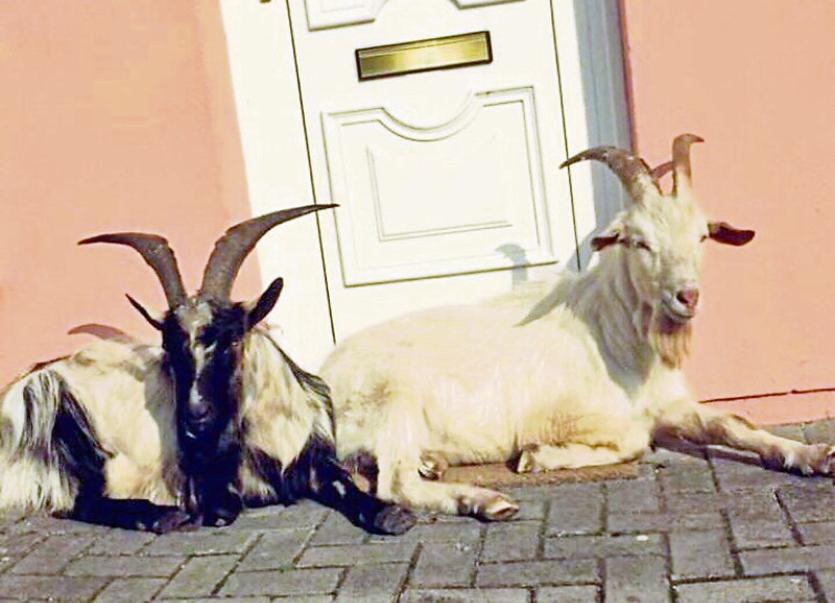 Two of the seven billy goats who have appeared in Thomondgate in recent weeks. Members of the herd have been perched on walls and “sitting down outside someone’s front door like Jack Russells”

MYSTERY surrounds a herd of seven billy goats that have been spotted roaming wild in Thomondgate.

The flock has been spotted running free, grazing in gardens and perching on walls in New Road, Thomondgate and by O’Dwyer’s Villas.

The goats are understood to be relatively friendly but local residents are concerned over the health and safety risk they pose, as well as being concerned for the herd’s welfare.

The goats appear to be well fed, according to Sinn Féin councillor John Costelloe who raised the issue at a meeting of the Community Leisure and Emergency Services SPC.

“But in terms of causing accidents, that’s my fear. There’s been lawns damaged, shrubbery has been eaten and cars have been damaged as well.”

The goats have been spotted climbing on garden walls and “sitting down outside someone’s front door like Jack Russells”, he added.

“There are elderly people living there and to come out in the morning and to have a goat perched on your front wall? It’s like something out of a Star Trek film.”

“They are being tackled, but where did they come from?”

The herd has appeared at the Learning Hub site on New Road five times recently.

“We also have an orchard here, full of apple trees so we just want to keep it safe and we have a lovely new vegetable patch that we just planted so we don’t want that going to waste.”

Quirkiest story of the week has to go to @Jess_JCasey who reports on a herd of 7 billy goats running amok in Limerick city. Here is two of them taking a break in Thomondgate pic.twitter.com/m4AtBKS1W9

Goats need a lot of care, according to Marion Fitzgibbon of Limerick Animal Welfare.

“Goats need vaccinations, they need foot care, they need their teeth looked at. They need to be in out of the rain, they’re from the desert. They’re not just rough and tumble animals that you can leave anywhere.”

Goats also require a lot of grazing, she said, adding that she fears the herd might starve.

“You’d often hear of one or two goats but I can’t imagine seven in a built up area.”

“There is no lighter side to this. It is dangerous and it is cruel.”

LAW has taken in a kid goat believed to have been a member of the herd and are appealing for anyone with information about its mother to contact them.

Due to legislation changes in 2012, only inspectors trained by the ISPCC can issue seizure notices for animals, Ms Fitzgibbon added.

Limerick City and County Council has confirmed it is “assessing what avenues can be taken under the current legislation and regulations.”

Cllr Costelloe says although he has serious concerns about the roaming goats, he does see the lighter side and called for a nature path to be designated in the area.

“We’re actually looking for a nature path in that area in Thomondgate, on that site. Maybe it's time for a nature park. Along that side of the river is a protected area in terms of the flora and the fauna.”