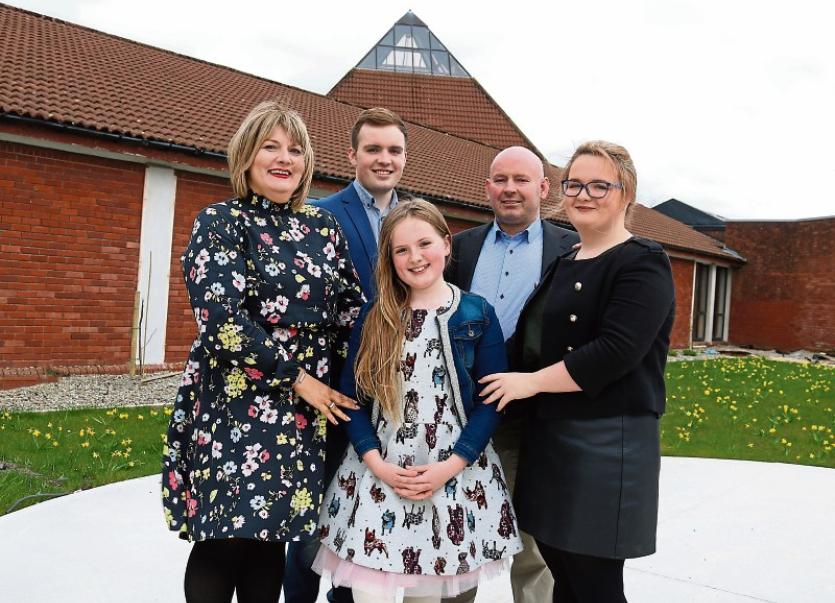 OVER €6m has been invested in transforming a landmark Limerick hotel into the biggest nursing home in the Mid-West region.

The famous Two Mile Inn on the city’s outskirts has been renamed Ennis Road Care Facility. When it opens in June, the family-run business will create 120 jobs made up of nurses, carers, physiotherapists, activity co-ordinators, culinary, housekeeping and administration staff.

Over 50 are currently working on the site to renovate and refurbish the former hotel into a state-of-the-art facility. There will be 100 beds in phase one and a dementia care facility in phase two.

Proprietors, James and Anne Maria Moore, from Bruree, say the iconic pyramid design, that won numerous architectural awards, will be retained. James said the Two Mile Inn, which closed in 2009, is part of local history.

“It is very close to people’s hearts. Huge crowds travelled from far and wide to go to the Two Mile Inn and the nightclub there called Poldark’s. It was busy every night of the week. Many a local marriage began in Poldark’s” said James. It was really popular in the 1970s when disco music took over the world and in later years many famous bands played there including The Cranberries.

James and Anne Maria, owners of Beech Lodge Care Facility in Bruree, say they want to make their new venture a “home from home” for residents and visitors. Anne Maria said the day room will be in the pyramid and there will also be a cafe for residents, their families and the public.

The neighbouring Thady O’Neill’s pub and restaurant, built in 2000, could also be serving hot food again as it is available for lease.

“It’s very exciting as it will be a care facility unlike no other due to its history and prestige. The way the Two Mile Inn was built really lends itself to a care facility,” said Anne Maria, a nurse with additional qualifications in the care of the older person and dementia care.

“We will have live music for residents just like there was in the Two Mile Inn days and there will also be a beauty spa,” she continued.

The mum of three - Edward, Barbara and Diane - says there is huge demand currently for nursing home beds in the city and its environs.

“It is a perfect location. Care includes long-term, short-term, respite and specialising in rehabilitation care due to an in house full-time physiotherapist. We are all living longer. According to the CSO, there are 540,000 people aged 65 plus in Ireland which accounts for 12% of the total population. This is set to rise to 1.4m, or 22% of the total population, by 2041,” said Anne Maria.

BCM Consulting Engineers were given the design contract. Paul Bourke, of BCM, said the Two Mile Inn site is the gateway development for most people travelling to Limerick from the west of Ireland.

“To be awarded the task of creating a design that transforms and brings back to life this iconic building, while working with the clients’ brief and vision for the new facility, is both exciting and challenging. The team at BCM are working tirelessly with our client to deliver what will be a modern state-of-the-art development, while trying to create a homely, comfortable facility for generations of residents into the future,” said Paul.

The Two Mile Inn was originally built by the late Tom Ryan.

It was later taken over by Brendan Dunne, after Mr Ryan developed the nearby Limerick Inn, now the Radisson Blu Hotel and Spa. For more on the Ennis Road Care Facility contact 063 90522.