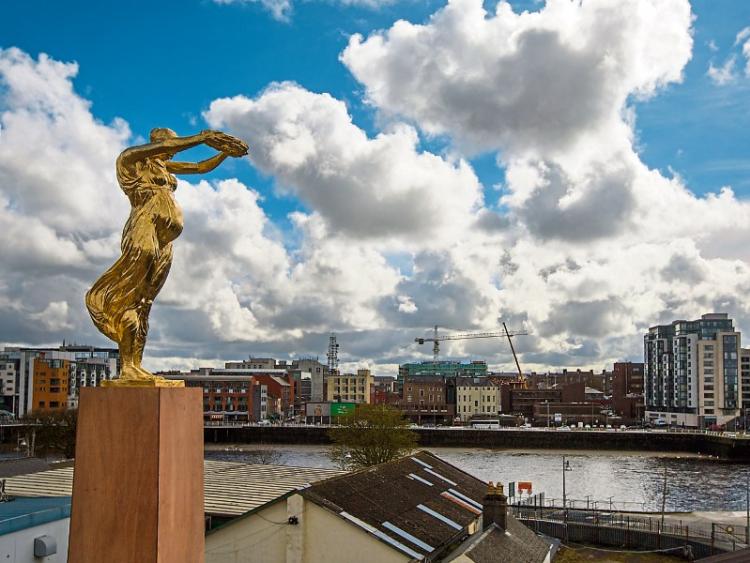 A GOLDEN display has appeared on Limerick's skyline as the city's prestigious biennial of visual art prepares for launch.

EVA Interational, Ireland’s biennial of contemporary art, returns to Limerick this April with the work of 56 artists to be put on display across the city. Some are already in situ, including towering Sanja Iveković’s Lady Rosa of Luxembourg in Cleeve's.

Taking its starting point from Night’s Candles are Burnt Out, a painting by iconic Limerick artist Sean Keating, the 38th EVA International will feature historical, recent and newly commissioned works.

Keating’s painting, which presents an allegory of the Irish psyche at the time of the construction of the Ardnacrusha hydroelectric dam in 1927, is set to be shown alongside works by artists working across locations, generations and media.

An extended programme of EVA International will also be presented at Irish Museum of Modern Art, Dublin.

Breaking a tradition dating back to 1990, the 38th EVA International has no title, a decision taken by this year’s curator Inti Guerrero.

“In our current state of nationalisms, hard-borders, protectionism and a complete change of course in humanity, where the liberal belief of a ‘never again’ seems to be dismantling, the word international suddenly carries an important weight worth embracing,” he explained.

EVA International opens in Limerick on April 14 and will run until July.

More information on opening weekend can be found on www.eva.ie.