'We’ll sleep the day after!’ - Limerick man to host longest coffee morning in the country 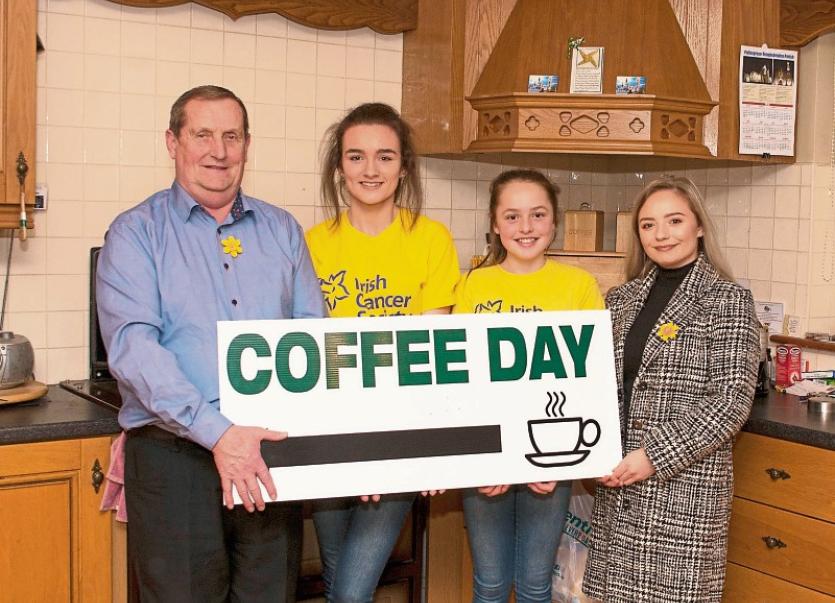 IF YOU need an early morning or late night caffeine hit while driving on the N24 this Friday then Mike O’Donoghue has you covered.

The Irish Cancer Society have confirmed to the Pallasgreen man that his coffee ‘morning’ is the longest in the country. Mike will have the coffee brewing and tea steeping from 7.30am to close to midnight this Friday, March 23 in his home.

“We’ll sleep the day after,” said Mike, who has survived bowel cancer. He started his fundraiser four years ago.

“My idea was to go from 10am to 10pm because the morning alone is too short with people working. People rang me saying, ‘Can I come in early before I go to work?’. I said ‘no problem’. I went from 7.45am last year to twenty to twelve at night,” said Mike. To date he has raised €10,000. This year he will open up from 7.30am to 11.30pm. Coming from Limerick turn left in the village and it is well signposted.

Mike, aged 67, said he couldn’t organise it without the help of Tara Campbell, Sarah Dillon and Saoirse Corbett.

“They are all local girls and they are brilliant. Saoirse is in college until 2pm but she'll be back at 3pm. Tara and Sarah are on holidays from school. Sarah is going training around 5.30pm with the Limerick U14 ladies team and she says she will be back again after that.

“They are unbelievable young women. Sarah is in first year, Tara is in fifth year and Saoirse is in university. I'd be lost without them,"” said Mike, a former postman and farmer who played all levels for Pallasgreen GAA.

A total of 227 called in for a cuppa and chat last year and Mike is hoping to beat that record on Friday.

“Every person that comes in has their tea, coffee and whatever they want to eat – there is plenty of food. You give your donation, sign the book, and there is a draw or prizes,” said Mike. He was diagnosed with bowel cancer when he was 59.

"I had a chest infection and I was going to my GP for my final cert to go back to work. On my way up, this feeling came over me that I should go get myself checked out and have a colonoscopy. I hardly knew what it meant, but something told me, and I said it to the doctor anyway.

“He said to me that I didn’t have any what they call ‘red flags'. But he said, ‘If you want to do it we will do it’ and the rest as they say is history."

Mike continued: "They got it very early. I had the operation and then I had the option of going for chemo and I had it. They tell me I've beaten it, with the help of God.”

The popular local man, who will be going on his 35th Cashel & Emly pilgrimage to Lourdes this year, decided to  support the Irish Cancer Society.

"There were Daffodil days going on so I thought to myself what could I do. I said I'd do a coffee morning and decided I'd go for the full day. The Cancer Society are gobsmacked that I go the whole day. They told me it’s the longest coffee day in the country.”