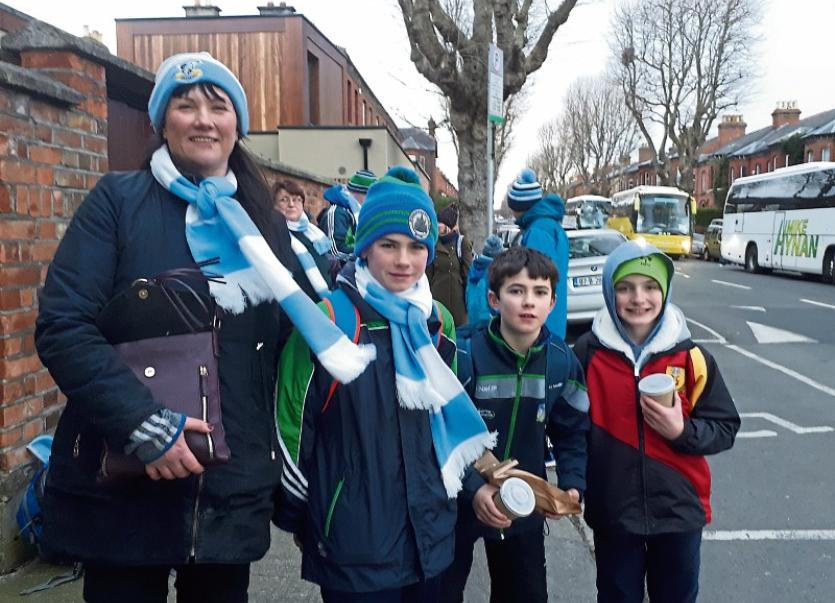 Liz Holmes of Feenagh, originally from Caherdavin with her two sons James, 13 and Sean, 10 and their friend Jack Morrissey, 10

THERE was pride laced with disappointment among the Na Piarsaigh fans leaving Croke Park this Saturday following the Sky Blues’ draw with Cuala.

The All-Ireland Club hurling final winners in 2016 and 2017 could not be separated following a classic game, which ended Na Piarsaigh 2-19, Cuala 1-22, after extra time.

A replay date will be confirmed in due course.

Barry O’Regan, bar manager at Na Piarsaigh’s clubhouse in Caherdavin said: “In the end, I think it was a fair result. The attitude of the players was first class. It was a cold day, a windy day, the ball was going all over the place.”

However, he feels a little hard done by, with Na Piarsaigh leading by three points going into the last minute of injury time at the end of the 60 – only to be denied victory by a Cuala goal, the last action of regulation time.

Thirteen-year-old James Holmes from Feenagh agreed, saying: “I felt the referee kept giving easy frees to Cuala. I think Na Piarsaigh will have them in the replay."

The match was played in close to freezing temperatures, and James’s mum Liz, originally from Caherdavin added: “I couldn't stop shivering. It was heart-stopping, nerve wracking. I don't know if I could go through it again. We had it won. We were so close. But we haven't lost, and we'll go again.”

Former Na Piarsaigh chairman Timmy O'Connor praised the panel – who were without two key men in the shape of Conor Boylan and Thomas Grimes – for their performance.

“We have to be extremely proud of everyone who played today. It was an unreal effort. We could have won it possibly, but i'm happy with the draw, and we'll have our two lads who were unavailable to us today back for the replay.”

“That was one of the best ever performances I've seen from a Na Piarsaigh team. They hurled to their full potential. Any neutral in the ground or watching it on telly must have enjoyed it,” he concluded.