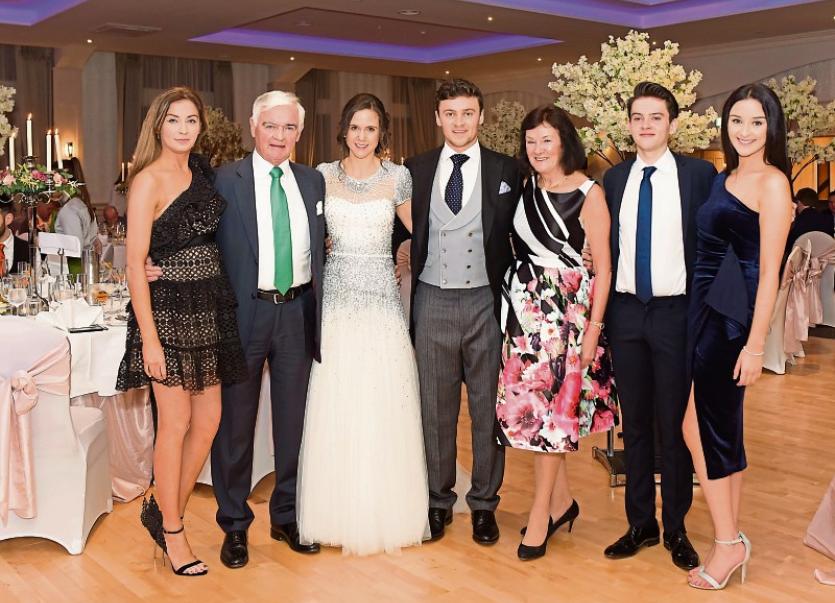 HUNDREDS of invited guests gathered in the new ballroom of the Longcourt House Hotel in Newcastle West to celebrate with owners Jim and Mary Long on the marriage of their son James Jnr to Rose Morgan Smith.

But it was also a chance to mark the completion of the hotel’s new ballroom complex.

This complex is a total new-build, replacing the old function room and nightclub and its opening signals that the entire hotel complex is now open for business.

James Jnr, who is a project manager with Westminster City Council in London, married his London-born sweetheart, policewoman Rose in Adare last Friday week and their wedding reception was held in Adare Manor.

But the following Saturday night, the newly weds welcomed the guests to a party bash in the family’s latest venture.

Owner Jim Long also took the opportunity to thank all those associated with the refurbishment and rebuilding of what was once the Riverroom Motel and later the Courtenay Lodge Hotel.

Mr Long, a native of Feoghanagh who has built up a considerable property development business in London over the past 40 years, bought the Courtenay Lodge shortly after it closed in late 2015 with the loss of over 40 jobs. It was, he said at the time, his first venture into the hotel business.

Since then the entire bedroom wing of the hotel has been refurbished to four-star standard and an entire new wing constructed to house a new bar and bistro as well as the ballroom complex. The project has involved an investment of approximately €5m.

The accommodation wing and bar/bistro opened in early December and the plan was to open the ballroom in time for the family wedding last weekend.

The re-opening of the refurbished and rebuilt hotel has been widely welcomed by business interests in the town. Paddy Fullam, secretary of the Newcastle West Development Association, speaking at the launch of the project last year, said the hotel would play a pivotal role in the town’s new five-year plan.

“A good hotel is an essential amenity for this county town. The lack of a hotel is an obstacle to progress. I believe this hotel will be a huge step in transforming Newcastle West,” he said.

The grand party stirred memories for many of the guests, including the chairman of the Development Association, former TD Michael Finucane whose wedding to his wife Hanna took place in the Riverroom Motel. Michael, who is a keen dancer, put on his dancing shoes once more as the party lasted well into the night.