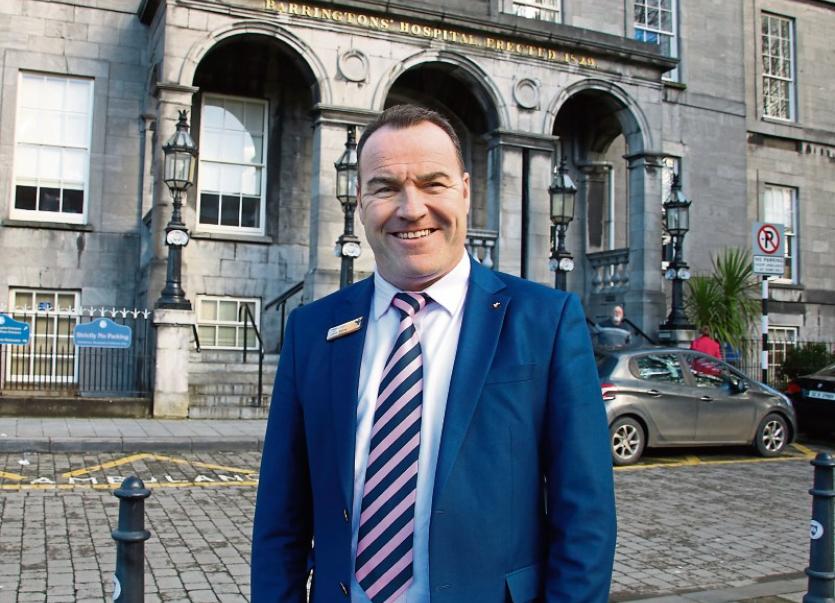 Jason Kenny has been general manager of Barringtons' Hospital since May Picture: Adrian Butler

THE DEVELOPMENT of an ambitious and unique “health campus” in Limerick is in the pipeline, the new general manager of Bons Secours Barringtons Hospital has said.

Jason Kenny, who was previously operations manager at Cork University Hospitals Group for seven years, was appointed to general manager last May.

Mr Kenny said that the health campus is currently at concept phase, and his hospital is working with the HSE, UL Hospitals Group, University of Limerick and Limerick Institute of Technology in delivering it.

Even in its embryonic stages, Barringtons has linked with the Graduate Entry Medical School at UL, and is assisting in the roll-out of a unique operating department practitioner (OPD) course at LIT.

The four-year programme, which commences this September, will teach students to be “an integral part of the multidisciplinary theatre team”, acting as a link between the surgical team and other elements of the theatre.

The CAO course, which will be the first of its kind in Ireland, will train students in the classroom and in operating theatres with the prospect of employment locally.

This is one of many objectives that Mr Kenny wants to achieve during his time as chief of the hospital, which was acquired by Bons Secours for €14.5m in 2017.

And as part of a new masterplan, the health group has ringfenced a total of €6m for developments at the hospital for the next three years.

This year, €2m has been allocated for the completion of the theatre, replacement of endoscopy equipment, a new entrance, reception and admissions on the lower ground floor.

In an interview with the Leader, Mr Kenny said that he wants to follow in the footsteps of the former owner Paul O’Byrne who died in May 2017.

“One of the first things I recognised when I joined was to sustain that and to build on that, and to create a good solid foundation that we could further and do more of what was already established in terms of the surgical services.”

They have also invested in the hospital’s ICT systems, which is integrated with the other the hospitals within the Bons Secours group.

He said that management is constantly analysing all medical advancements, but its primary focus at present is to “solidifying and consolidating what we currently do well”.

Mr Kenny said that he is constantly working with local health services to reduce waiting lists in the Mid-West.

“We welcome and we are embracing, and we have received with open arms by our colleagues in the HSE in sitting down with them on a regular basis, and exploring any opportunities that may exist in terms of us assisting them on any initiatives that would help with patient flow,” he said.

“We are a private hospital. Whilst we don’t provide the full remit of hospital services across the 30-40 specialties that Dooradoyle provide, we don’t have an inpatient medicine service here at this point in time. But we have quite a wide range of the surgical services, and the surgical services tend be aligned to those on waiting lists. We are further strongly positioned in terms of assisting in that, through the NTPF or through local arrangements.”

Mr Kenny said that when he joined the team, his main goals were to reassure staff of any changes, link in with GPs in the region, and build on external partnerships with colleges and the HSE.

In addition, Barringtons has been able to retain its 125 staff and take on an extra 25 staff, including nine consultants.

“It might sound cliche, but the common denominator be it public, voluntary, or private, is the patient.”

Mr Kenny, who commutes from Mallow every morning, is married to Shirley and has two daughters, aged 14 and 11.

Jason has been working in healthcare for 20 years, with previous experience at Tralee Hospital, Kerry General Hospital, and Mercy University Hospital.