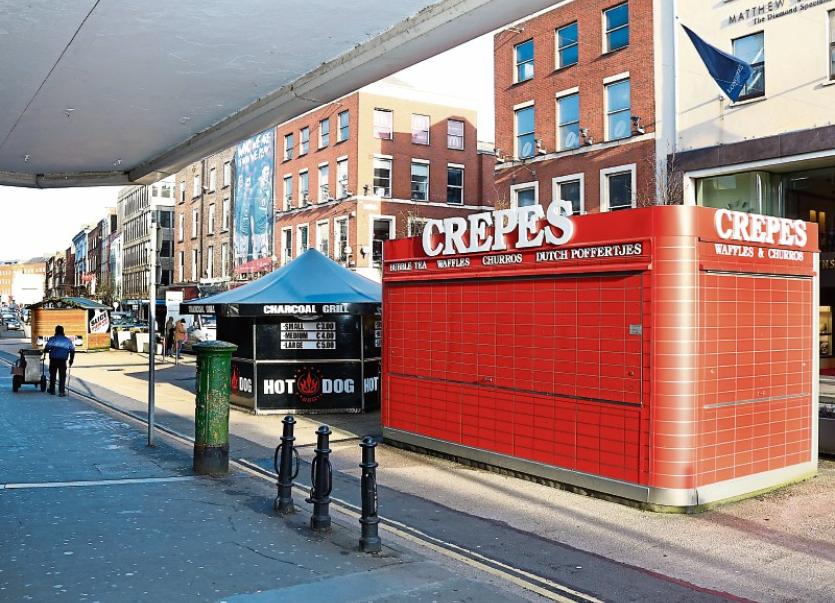 Limerick City and County Council says there is a waiting list of traders who want to operate at the urban garden Picture: Adrian Butler

A ROW has erupted between the operators of two food stalls at Limerick’s urban market and the local authority.

Limerick City and County Council has initiated court proceedings against Marcin Suminski and Wiola Suminksi over what it alleges is their failure to comply with an enforcement notice which was served on them last summer.

The notice requires them to remove an unlicenced hot dog stand from the urban garden at O’Connell Street in the city centre which the Council says constitutes an unauthorised development.

The matter, which is being contested, has been listed for a full hearing at the district court next month.

Solicitor Sarah Ryan, representing Mr and Mrs Suminski, said that her clients accept they are occupying “two slots” but only have a single licence.

“They have permission for the crepe stand but not the other,” she said adding that her clients previously held two licences but that one of them was not renewed by the local authority.

Referencing correspondence from a planning official, Ms Ryan said her clients are seeking to amend the (valid) licence to allow them to accommodate both the crepe and hot dogs stands under the one roof.

This, she said, would require an additional three metres of space.

“We have submitted a detailed plan, which we are perfectly entitled to do,” she said adding that her clients are operating a profitable business which employs four people.

Solicitor Will Leahy, representing the local authority, said there is a waiting list of traders who who want to operate at the urban garden and that the Council is “out of pocket” because of the presence of the unlicenced food stall.

“They have been illegally operating on the site since before last summer,” he said adding that he was anxious that the matter be finalised.

”I don’t want this thing to go on,” he said to which Ms Ryan responded: “It’s not black and white”.

Noting that the matter is to be fully contested, Judge Marian O’Leary adjourned the matter to March 20 next.