Limerick Person of the Month: Songstress Emma weaving her own magic with unique voice 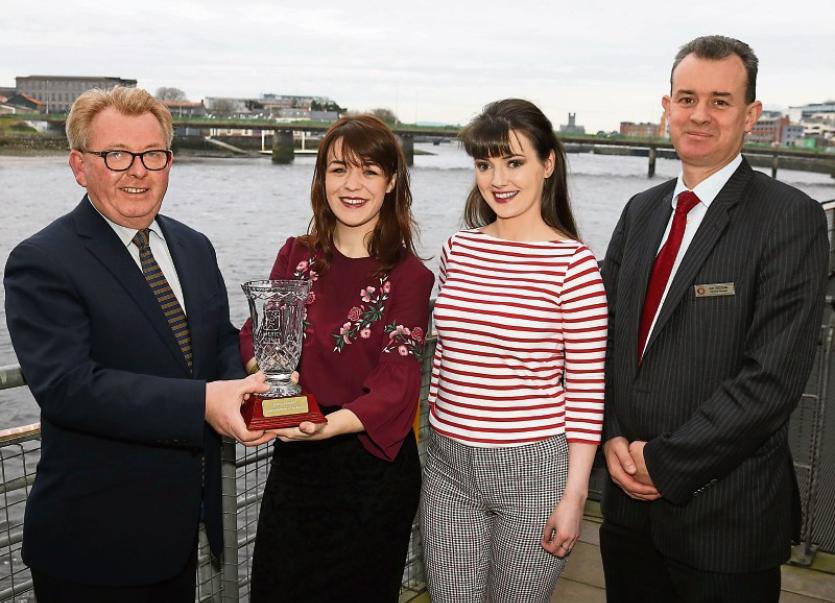 Emma Langford is presented with the Limerick Person of the Month award for January 2018 by Dave O'Hora of Southern. Also present is Aine Fitzgerald, Limerick Leader and Pat Reddan, Clayton Hotel

SINGER-SONGWRITER Emma Langford who has been weaving magic through her unique voice, has been named Limerick Person of the Month for January, 2018.

The Caherdavin woman who is receiving wide critical-acclaim for her debut LP, Quiet Giant, was presented with her award at Limerick's Clayton Hotel this week.

“It was really unexpected. It’s lovely. I feel totally undeserving but I’m chuffed,” said the singer whose interest in music developed from an early age when her mother, Ina, who hails from Askeaton, taught her first chords on the guitar.

“But I was always singing,” she points out, “my sister and I used to listen to the musicals like Les Mis and Phantom of the Opera. We would have the cassettes of them and we would play them and we would slow them down and write down the lyrics and practice duets together. I would have been seven or eight at the time.”

After school, she took a year out and worked for a year but then “music called me”.

“I did the BA in Voice and Dance in UL. I went away and worked and travelled a bit and then I did the MA in Community Music in UL.

“I learned a lot in UL,” she points out. “The people I met in the Irish World Academy were incredible and a few of them are in my band, even still. I really loved it.”

Art, poetry,  music and writing have always been central to who Emma is.

“I was always writing poetry and always writing stories and then songwriting became a natural way of expressing myself in my teens when you start having all of these feelings and angst and crushes and all that stuff. Music is the way I chose to express it and started writing some very, very bad songs,” she jokes, “and some alright ones, and one of them is Quiet Giant, the name of my album.”

Released in October, Quiet Giant is for sale in Golden Discs, and Steamboat Music in Limerick, and Tower Records in Dublin. Emma will be touring in Europe over the next few months.

“I’m just about to release it on Vinyl as well. I have a pre-order page that I have just set up.

“There will be a gorgeous 12-inch print of the artwork that people can take home as well as having the vinyl.”

Emma admits that while growing up in Limerick she had a hard time finding her niche or groove “but now there is a lovely musical, cultural scene in Limerick and a lovely musical community between the venues and other musicians and the different genres.

“It’s a great place to hear any kind of music at any given time. It’s a very supportive community.”

“The Friday night before her death we were in Dolan’s singing songs she had made famous with her iconic, unique voice and for then two days later to get the news of the death of the woman. I felt a connection with her, even though I almost don’t feel entitled to feel a connection to her  - we went to the same school, we grew up in the same city, she joined The Cranberries the year I was born. I saw her wandering around town on occasion. I think as a woman who grew up in Limerick, trying to pursue a career in music, to see someone like Dolores do what she did and be so herself all the time was, for me, really inspirational, even if I didn’t realise it.

“And then my mom possibly put herself in Dolores’ mother’s shoes as well -  my mom and I have a very close relationship, she is my biggest fan.”

Next week Emma will pay tribute to the late Cranberries front woman by singing one of her songs at the Limerick Person of the Year 2017 awards which take place in the Clayton Hotel.

“To get to represent Dolores at the event, in some way, is really lovely and special,” she said.