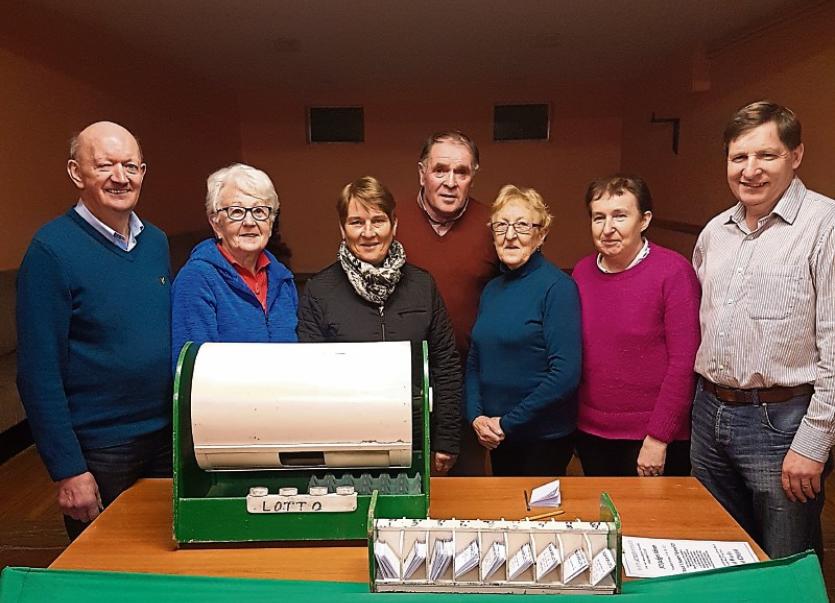 CAPPAMORE is running a temperature due to lotto fever as the local athletics club has €20,000 up for grabs.

“Loads of people are looking for tickets and some who would just just buy one a week are buying two or three. There is a great buzz in the parish over it. Good luck to all,” said Margaret.

For only €2, everyone is in with a chance of picking the four numbers at the weekly draw and starting 2018 in style. €200 is shared amongst all players with any three correct numbers or lucky dips. But everybody wants to be first past the finishing line and claim the €20k. Tickets are available from local businesses, club members and at the clubhouse.

Bilboa Sports and Athletics Club has a proud history, dating back to 1928. The first official athletics meeting commenced in 1977 and throughout the 80s, 90s and 2000s the name of Bilboa was stamped on the athletics map due to major successes.

It belies its rural location to have first class facilities. In 1987, the club developed their own track on a voluntary basis. In 1992, the first phase was completed with boundary walls, fencing and playing pitch.

Phase two started with the building of the complex – gym, showers, toilets and dressing rooms. To continue the development of the club, the fundraising lotto began in 1992. The current top prize is only the second time it has reached €20,000.

“The lotto was vital in order to progress with the development of our club facilities. It is organised by a committed group on a weekly basis.

“It is a source of income for the development  and maintenance of our outstanding amenity which sits in the foothills of the Slieve Felim hills,” said Margaret. Other clubs benefiting from the sale of our tickets are Rearcross FC and Hollyford Tidy Towns.

Bilboa Athletics and Sports Club is a great sponsor of local events, charities and fundraisers within the parish and further afield. It serves local clubs for training facilities and the wider community. Groups use it for athletics, football, soccer, hurling and most recently their “Couch to 5k” initiative, which has exceeded all expectations, said Margaret.

“They’ve been inspired by Operation Transformation. We have 50 doing it at the minute. We have loads of people using our flood-lit gritted track. They can walk all the way around.

“The country roads are so dark and dangerous this time of year,” said Margaret.

Bilboa has between 20 to 30 registered adult athletes and 60 children on their books. Every year they run the Ger Mullane 10K and 5K road race, which takes place on June 15, 2018.