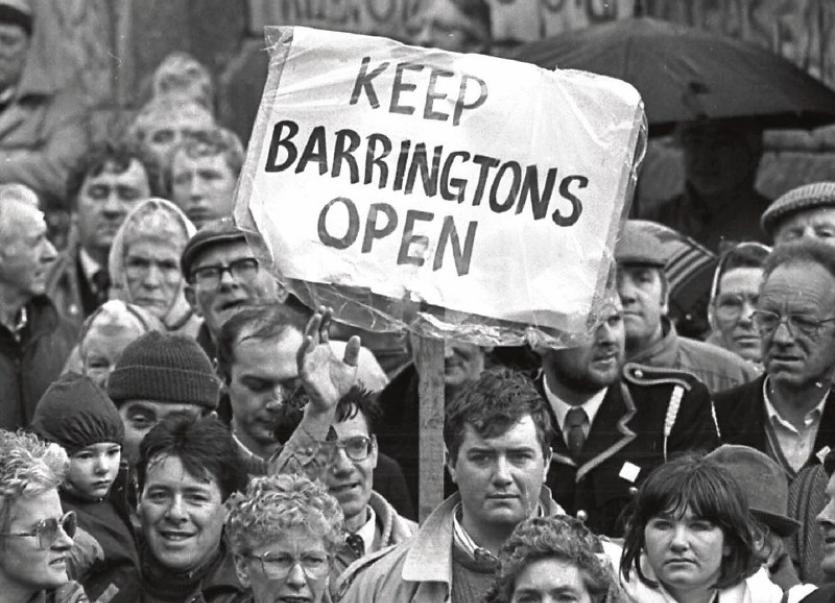 Despite major public protests, Barringtons Hospital closed in 1988 after 160 years

THE FORMER leader of the Progressive Democrats party and ex-Limerick TD Des O’Malley has suggested that the controversial closure of Barringtons Hospital in 1988 has led “in part” to Limerick’s over-crowding crisis.

In December 1987, the Department of Health, run by former Minister Rory O’Hanlon, made the decision to discontinue funding for the hospital, which had been operating for 160 years. Despite major protests by top political figures and the public, the hospital ceased operations in 1988. It reopened in 1991, after the late Paul O’Byrne acquired the facility. It is currently run by Bon Secours Health System.

In his letter, which was read out on Ms Finucane’s show on Sunday morning, Mr O’Malley said: “I never opposed the closure of a hospital in Limerick at the time, but I made it abundantly clear then and since that the hospital that should close was not Barringtons, which was efficient and much-used; but St John’s, which was less used and less vital to the needs of the people even though its cost was roughly similar.

“My attitude seemed to accord with the professional and the official advice at the time, which was also the overwhelming view on the ground in Limerick.

“However, as a result of episcopal intervention, all the advice was overruled and Barringtons was chosen for closure. I could not and did not agree with the decision that apparently was made for religious, rather than medical reasons. I couldn’t, in conscience, do otherwise and I would do the same again today.

“I greatly regret that failure to achieve my objective at the time. It has caused suffering and loss to the people of Limerick area ever since. This wrong decision about Barringtons has contributed, in part, to the fact that even in this very month Limerick has, from time to time, the longest waiting lists on trolleys in the country.”

Fianna Fail TD Willie O’Dea, who lost the whip for voting against his Government which wanted to close the facility, said he agreed with Mr O’Malley “100%”.

“It is having an impact now. I have absolutely no doubt in my mind about that, and I think my decision to vote against my own Government at the time has been vindicated by subsequent events.”

Regarding the “episcopal intervention”, Deputy O’Dea told the Leader that he had “no direct information” of this.