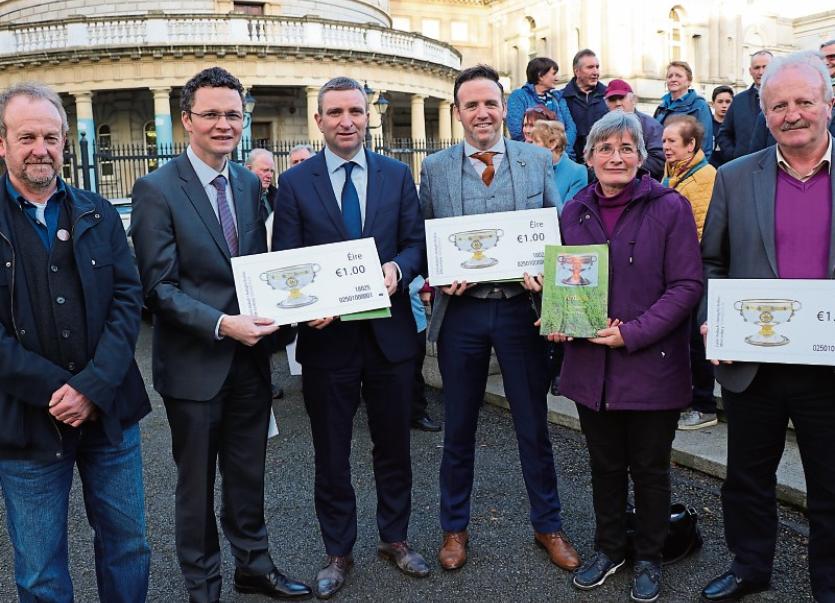 THE Ardagh Chalice is the subject of a brand new stamp issued by An Post, as part of a series to celebrate some of Ireland’s best-known antiquities.

The postal service’s latest set of definitive stamps were officially issued last week and will increase the profile of some of the most impressive objects relating to Irish history.

The 8th century silver chalice, one of the most famous discovered items from Irish early Christian times, was dug up at a ring fort near Ardagh, West Limerick, in 1868 - by two boys who were digging in a potato field.

The chalice, which was found along with other items such as ancient brooches, is now stationed at the National Museum of Ireland, Dublin.

Definitive stamps are Ireland’s ‘everyday’ stamps that remain on sale for a number of years. In this, the new edition of Ireland’s ninth definitive series, the Ardagh Chalice is in good company. The Tara Brooch and the Book of Kells have also been immortalised on postage stamps.

The stamps are the second phase of the series, ‘A History of Ireland in 100 Objects, a selection’, unveiled at the National Museum in 2017.

Each object opens a window into an important moment in Irish history between 5000BC and the early 21st Century. Images of a further 100 Objects tracing Ireland’s history will be issued on stamps over the next five years.

Fianna Fáil TD Niall Collins suggested that more needs to be done to promote Ardagh and its historic roots.

“The Ardagh Chalice is an integral part of Limerick’s heritage,” said Niall Collins. “Unfortunately its impact from a heritage and historical perspective isn’t felt in Limerick.

“The great work being undertaken by St Kieran’s Heritage Association in raising awareness and promoting a celebration is to be commended. It is great to see An Post playing its part also in this awareness campaign,” he added.

“Our Government should do more to promote and harness the potential of our heritage in County Limerick and Ardagh would be a great case in point where this could be done. We see the many positive spin-off effects of heritage interpretive visitor centres around the country, and I see no reason why Ardagh couldn’t be the same.”