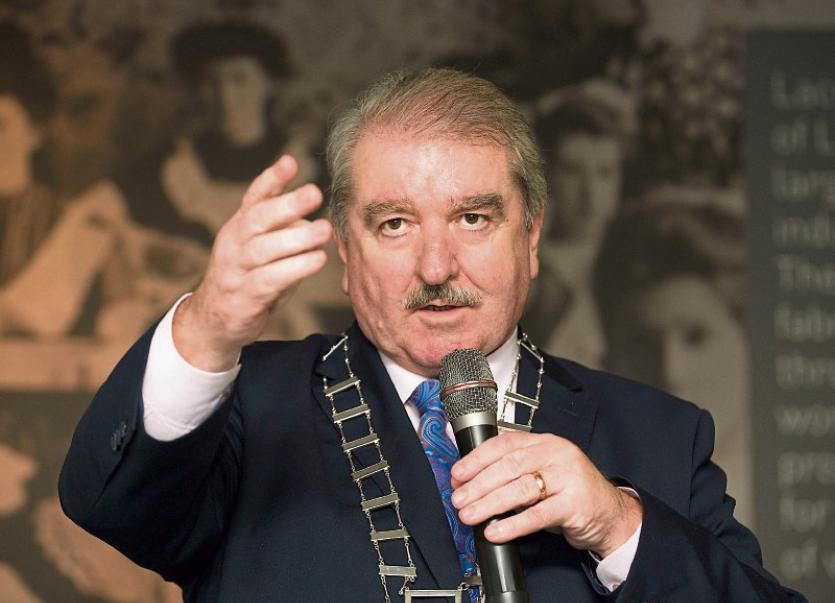 Cllr Kevin Sheahan: Put convicts to work on the roads

THE Mayor of Limerick City and County, Cllr Stephen Keary has come out in favour of ‘chain gangs’ repairing Limerick’s roads.

“I do believe it is a very, very good idea,” he said at a council meeting, responding to a suggestion from Fianna Fail’s Cllr Kevin Sheahan that people convicted of crimes should be put to work on the roads.

“We’ll send you out the Hutches,” quipped Cllr John Gilligan Ind. “What about the bankers?” came the shout from somewhere else in the Council Chamber in Dooradoyle.

They were speaking at Monday’s meeting of Limerick City and County Council where councillors from all sides raised concerns about the havoc wreaked on roads by heavy rains and flooding and  called for more government funds to repair the damage.

“We need money but we need more than money,” Cllr Sheahan said. “We need permission from government to employ more manpower. We are already seeing a shortage of manpower on our roads.”

There are plenty people found guilty of crimes, he continued. “Why can’t we put them on the roads instead of putting them up in the lap of luxury in our jails?”

But Solidarity’s Cllr Cian Prendiville rejected the suggestion as a disgrace and an insult to road staff to say their work could be”outsourced to chain gangs”.  He pointed the finger at “over a decade of austerity” and cuts for the state of the roads. “Now the chickens are coming home to roost,” he said.

Earlier, Cllr Jerome Scanlan FG opened the discussion saying local roads are in a “terrible state” and called on Council management to make representations to the government.

“Rain damage and potholes are very, very bad and are particularly noticeable over the past three weeks. Things have deteriorated,” he said.

“It is an emergency,” Cllr Emmett O’Brien said. There had been a lot of flooding and water tables were very  high, he added. The problem was not just a rural one, Cllr Vivienne Crowley FF said, citing flooding and potholes on city roads as well.

A number of councillors raised the dangers of driving into water-logged potholes especially at night. “Cars are going to be damaged. That is not fair,” said Cllr Lisa Marie Sheehy Ind.

Cllr John Sheahan FG raised the need to use the right machinery to get water-tables opened as quickly as possible while Cllr Paul Keller Solidarity said the time had come to invest in specialised equipment to fix potholes. “Do it once and it will last,” he said.

Otherwise, it is a waste of time and tar, he argued.

The city used to have a team to keep the drains clear, Cllr John Costello SF pointed out. Now however, concrete was being brushed into the drains following work.

“All the drains should be looked at,” he said.

Cllr Richard O’Donoghue Ind said there should be a special task force to look at roads.

Chief executive Conn Murray pointed out that road investment in 2008 was €20m and was now down to €14m. “We have seen a significant reduction,” he said. “You have to keep investing in roads.” Otherwise, the basic fabric deteriorates. He was hopeful of acquiring additional funds however.