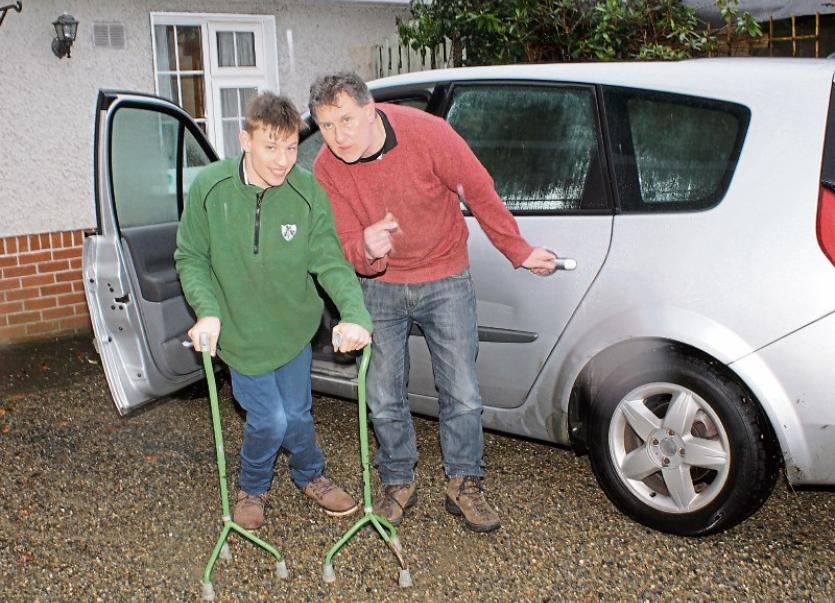 A YOUNG Limerick man with cerebral palsy and his dad haven’t eaten or slept in days after a shocking attempted carjacking.

Sean Ryan and his wife Mary’s big fear was that the perpetrators would have driven off and dumped their 20-year-old son, who cannot walk or talk, in the countryside.

Sean and Darragh, from the Ennis Road, were sitting in their 2007 Renault Scenic outside a shop on the Old Cratloe Road at around 5.15pm on Friday.

“I saw an individual approaching my car from the front. He was about 5 foot 10 inches tall, tracksuit, hoodie, scrawny looking – your stereotypical scumbag. I knew he was up to no good by his body language and stare.

“He aggressively tried the back seat passenger door where my disabled son Darragh was seated. I was lucky I had the central locking on.

“I started the car and moved a few yards but had to stop as there was traffic on the Old Cratloe Road. He then made a second attempt to my passenger door.  He stared at me, placed his hand to his throat in a threatening matter as if to say, ‘I’ll do you’. He kicked the door of my car. I managed to drive off,” said Sean.

He thinks there were two involved in the carjacking.

“The guy went back to another fellow when I got out on to the road. I suppose the plan was to get me out of the car and then the other fellow would jump into the driver’s seat. Automatically the first thing you will do is go to get out and clobber the guy. I didn’t do it which is remarkable.

“The first thing my wife Mary said is they would have taken the car and dumped Darragh out in the middle of nowhere. He can’t talk. That has been going through our heads since – thinking about all these permutations,” said Sean.

Darragh had no appetite on Friday night after the incident and only picked at his food on Saturday.

“He is wide enough to know what is going on and especially when there was a fellow trying to get in his door, and his face was in his window looking at him. That would frighten anybody,” he said.

Sean has found it hard to sleep since it happened.

“It was shocking and traumatic. Everything is running through your head. You’re basically wondering what could have happened,” said Sean, who believes the carjackers spotted the blue disabled badge on the car and thought it was a “vulnerable, soft target”.

He made a formal complaint to Mayorstone gardai who are investigating.

“That is the second time it has happened. I was coming through Thomondgate about a year ago and traffic was heavy.  A guy went straight for the passenger door. Luckily I had it locked. Darragh was in the back. These guys have no fear,” said Sean, who spoke to the Leader to warn others to keep their central locking on while they are driving.

“These criminals are hoping people don’t lock their doors while they are driving. The majority of people don’t. It is something I have really got into the habit of since the first incident in Thomondgate. It saved us the other evening,” concluded Sean.