Funding of €12.5m for Limerick's Opera Centre given 'on understanding' of housing 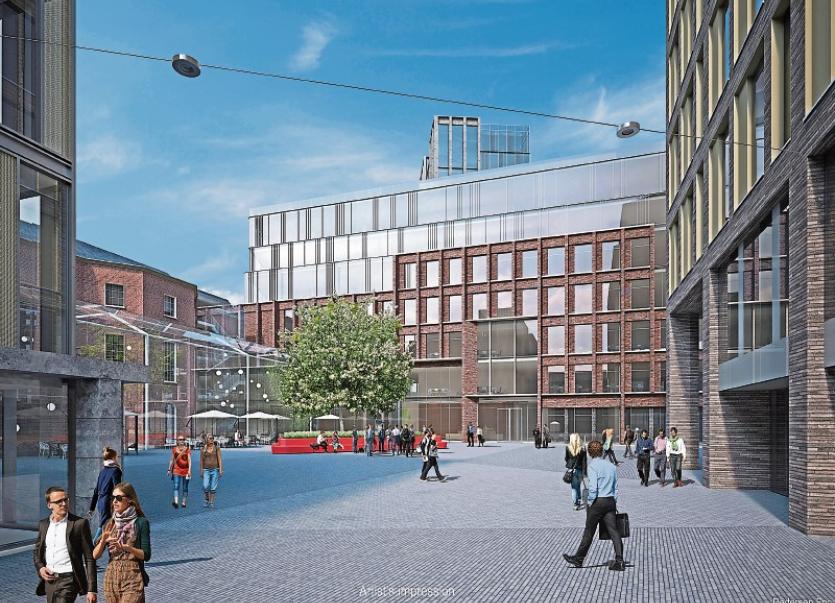 Where have all the houses gone? Plans for the €150m redevelopment of Project Opera last year envisaged three office blocks – but no residential units

JAN O’Sullivan has revealed when she approved money for Council to buy the Opera Centre site in Limerick, it was on the understanding of housing going in to the development.

The Labour TD was Housing Minister in the coalition government in 2011 when Limerick City Council was given €12.5m from the Department of the Environment to buy the Opera Centre from Nama to transform the site.

And she said this money was given “on the understanding” there would be housing.

This week, the Limerick Leader disclosed that Council bosses had originally planned to build 161 new housing units in the scheme – and it was effectively on this basis that government approved the  funding, according to Ms O’Sullivan.

But six years on from this, new plans for the project showed three towering office blocks, but crucially no residential units, a move which has brought about opposition from lobbies as diverse as the Limerick Chamber and homelessness charity Novas.

Now, Ms O’Sullivan, who is her party’s housing spokesperson, has revealed a key perspective on the approval of the purchase money.

“I confirm that when I signed off on the allocation of €12.5m from the national regeneration fund to go towards the purchase of the site from Nama when I was minister with responsibility for regeneration, it was on the understanding that it would provide homes for people to live in the city centre, as well as commercial and office accommodation,” she said in a statement to the Limerick Leader.

Earlier this week, emails from 2011 emerged where former city manager Tom Mackey said the site at Patrick Street could “comfortably accommodate” both social and affordable housing.

This, and Ms O’Sullivan’s intervention poses questions as to when the decision to not include accommodation in Project Opera – amid a national housing crisis – was made, and by whom.

While Limerick Twenty Thirty, the public development company responsible for its development, was not available for comment, Cllr James Collins, who sits as a board member, has previously stated it is not its role to develop housing there.

Separately, in an interview with Business Leader this week, Conor Mooney, of the Council of Europe Bank, which is loaning €85m to Limerick Twenty Thirty to help build the development, said if the plan was changed, it would require the loan terms to be reviewed.

He said: “The project, which has been presented to us stands in its own right. I think there are complementary social housing developments going on throughout the city. [If the plan was changed], it wouldn’t send the project back to square one, but certainly the loan would need to be renewed. Certainly where there is any significant change, it would need a certain element of reanalysis and reappraisal.”

Despite this, Ms O’Sullivan repeated her call on the Council to alter the plan to bring some residential element into play, adding: “It sends the wrong signal completely if this prime site, publicly owned, has no homes whatsoever when we have such a housing crisis.”​

Days before securing funding to buy the site from Nama, Council bosses outlined plans for 59 units in existing buildings and 102 new homes.

Plans were also in place for a “large department store” with its main entrance at the Ellen Street-Michael Street junction.

Cllr Cian Prendiville, who has campaigned for housing in the €150m plan says people must “demand” these units are built, adding: “I think people deserve to know when was this U-turn made and who agreed to it?”

A letter from Mr Mackey – dated October 28, 2011 – seeking funding under the department’s regeneration budget stated he believed the Opera Centre offered opportunities to deliver both social and private housing “which will increase demand in the city centre”, as well as providing “new civic spaces which will entice people back from the suburbs to the city centre.”

Reacting, Cllr Prendiville said: “Somewhere between 2011 and today, the Council gave up on this plan for the city centre to be a place to work, socialise and live. Precisely at the time when a need for social housing and affordable mortgages was growing, the council turned its backs on providing 160 apartments.”