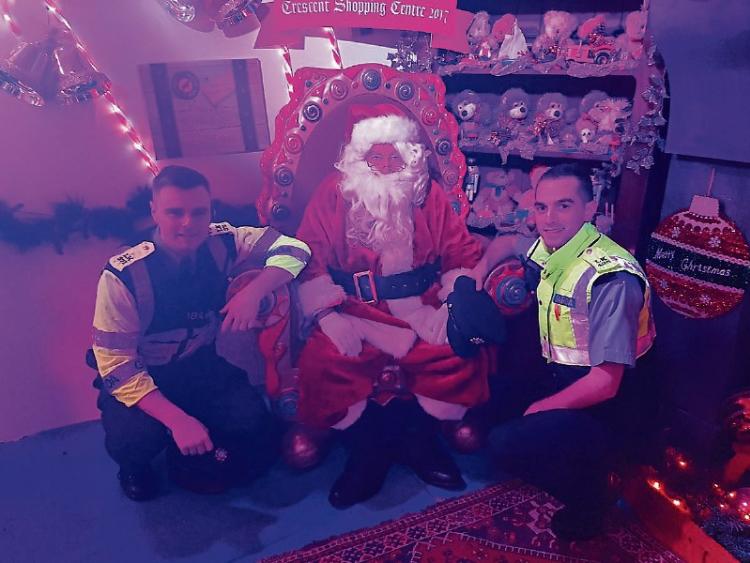 GARDAI in Limerick have offered some crime prevention advice to Santa on “keeping the grotto safe this Christmas”.

In a tweet on the @GardaInfo account, gardai visited Santa at the Crescent Shopping Centre to put out the “LockUpLightUp” message.

It comes as Limerick gardai this week issued a serious appeal to homeowners, landlords and students to ensure their properties are properly secured over Christmas.

Divisional crime prevention officer Sgt Ber Leetch said that the “greatest deterrents for burglars are signs of occupancy” and urged homeowners to “invest in a plug in timer switch”.

“When I look back at the crimes in the county of Limerick over the last week, I noticed that a number of the burglaries happened between 5pm and 9pm in the evenings. I believe that this is because the burglars can see that the home is unoccupied.

“A plug in timer switch can be bought at any hardware shop. It means that lights come on at 5pm whether you’re at home or not and it can prevent your home from being broken into,” she added.

According to Sgt Ber Leetch, students’ houses are often targeted around this time of the year.

“With a number of people in the house or flat not everybody will have the same sense of responsibility towards crime prevention and home security. Do not assume that the accommodation is secure, check all of the windows and doors,” she said.

In one incident in in the Caherconlish area of Limerick, gardai said a homeowner’s own ladder was used by a burglar to climb through an open upstairs window.

“Walk around your home and garden and remove anything that is likely to assist a burglar in breaking into your home,” said Sgt Leetch.